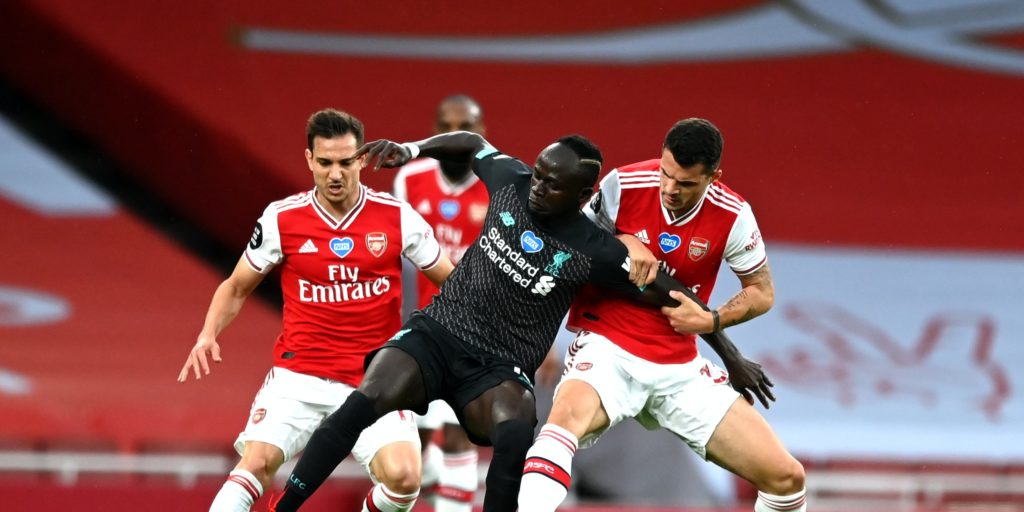 The Gunners fought back to defeat the champions at the Emirates.

The Portugal international is cup-tied for Saturday’s meeting with Manchester City but has backed his team-mates to get the job done.

After falling behind to Liverpool through Sadio Mane’s goal, Arsenal rallied and were gifted two goals as Alexandre Lacazette and Reiss Nelson pounced on defensive errors to earn a 2-1 win.

It was a fine response from Mikel Arteta’s side, who had lost the north London derby at neighbours Tottenham three days earlier.

Soares was recalled for the game against Liverpool and now wants to see his colleagues keep momentum going as he cheers them on from the sidelines.

“We know it will be another tough game against a great opponent on the weekend, but we are in a good moment,” said the full-back, who featured for Southampton in the FA Cup before joining Arsenal in January.

“I just think we need to keep this spirit and the rest will come. If we keep working like this, it is just the natural way for a win to come.

“The team have moments and when you keep growing something the wins always give you a push.

“You have to believe in the work of the coaching staff every day and, of course, when you win you can believe more and it helps the team in that moment.

“I think against Tottenham it was a different game, we gave our best and controlled most of the game but didn’t get the three points.

“Last night we had a great reaction with character, we showed that sometimes you need to be able to suffer and stay together as one.

“We did that, we showed a great attitude, everyone was supporting one another and when that happens the wins can happen like they did.”

Arsenal confirmed on Thursday that defender Dinos Mavropanos has signed a new contract at the Emirates Stadium and will move to Stuttgart on loan next season.

The 22-year-old spent the second half of the 2019/20 campaign on loan at Nurnberg having been unable to force his way into the Arsenal side.

Liverpool can no longer break the record Premier League points haul having fallen to defeat in the capital.

Virgil Van Dijk was caught out for Lacazette’s equaliser before goalkeeper Alisson Becker’s wayward ball out from the back allowed the France striker to tee up Nelson for the winner.

“Maybe the mentally we were not at 100 percent,” Alisson told LFCTV.

“At the beginning of the game we were there, in the first 20 minutes we started really well and then we scored, but the moment we scored we dropped a little bit.

“We started to make silly mistakes and then we commit two mistakes we usually do not make during the season and then we weren’t there to cover those mistakes.”

Alisson now wants to finish the season strongly, starting at home to Chelsea next Wednesday – where the Reds will lift the Premier League trophy for the first time.

“We didn’t deliver 100 percent on the pitch, and this is what we need to do in the last two games,” the Brazil international added.

“We are looking forward to that and we want to win the match.

“We know it will be a tough match but we want to win it to celebrate in the best way because when you lose you stay a little bit frustrated but nothing will take off the shine we have now being champions.”