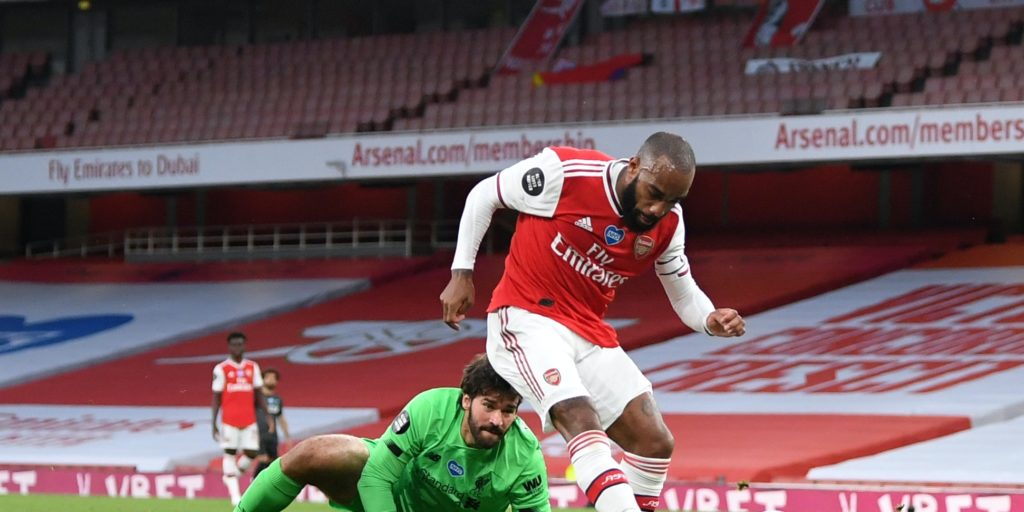 The Gunners took advantage of mistakes from Virgil Van Dijk and Alisson.

Arsenal took advantage of two Liverpool errors to end the new Premier League champions’ quest for a record-breaking points tally and maintain their slim hopes of qualifying for Europe next season.

The Gunners had not beaten Liverpool in their last nine league meetings but a 2-1 win at the Emirates Stadium, their goals coming from their only shots on target, left Mikel Arteta’s side ninth – only three points behind sixth-placed Wolves.

When Sadio Mane gave the visitors the lead it looked to be the same old story for Arsenal against their so-called top-six rivals, but Alexandre Lacazette and Reiss Nelson pounced on costly mistakes to turn the game around before the interval.

Virgil Van Dijk and Alisson were the guilty parties, with the defeat meaning Jurgen Klopp’s runaway side will now fall short in their attempt to end the campaign with 100-plus points.

Arteta, making five changes with an eye on Saturday’s FA Cup semi-final with Manchester City, opted to drop the likes of Pierre-Emerick Aubameyang, Dani Ceballos and Hector Bellerin to the bench.

The hosts survived an early scare as goalkeeper Emiliano Martinez’s clearance was charged down by Roberto Firmino, with the ball hitting the base of the post before squirming behind.

Liverpool did not have to wait too long to break the deadlock, Firmino and Andy Robertson combining down the left to tee up Mane, who finished off the move with ease.

Van Dijk has rightly been praised for his performances at the heart of the Liverpool defence but he gifted Arsenal their equaliser.

The Holland international was pressed by Nelson and passed the ball straight into the path of Lacazette, who was left with a simple finish to haul Arsenal level with his third goal in his last four games.

Things went from bad to worse for the Liverpool defence before the break, with goalkeeper Alisson looking to play out from the back but only picking out an alert Lacazette, who played in Nelson to give Arsenal the lead.

Klopp was quick down the tunnel at the interval having silently fumed in his seat as the first half wore on.

His side continued to have the better of the ball after the restart and Mohamed Salah’s fine piece of skill left David Luiz on the ground, but Martinez was equal to the Egyptian’s strike, tipping it over the crossbar.

Arteta responded with a triple change, introducing captain and top goalscorer Aubameyang as well as Ceballos and Joe Willock.

It was Liverpool’s own substitute, Takumi Minamino, who shot wide soon after he had come off the bench, while Salah fluffed his lines with a back-post header that ended up straight in the hands of Martinez.

Arsenal were doing well to limit Liverpool to occasional chances and even had an opportunity to wrap up the points in the last minute, only for Willock to slash his shot wide.

Arsenal still saw out the contest, Arteta getting the better of Klopp and seeing his side bounce back from derby defeat at Tottenham, courtesy in the main to Liverpool’s lax defending.