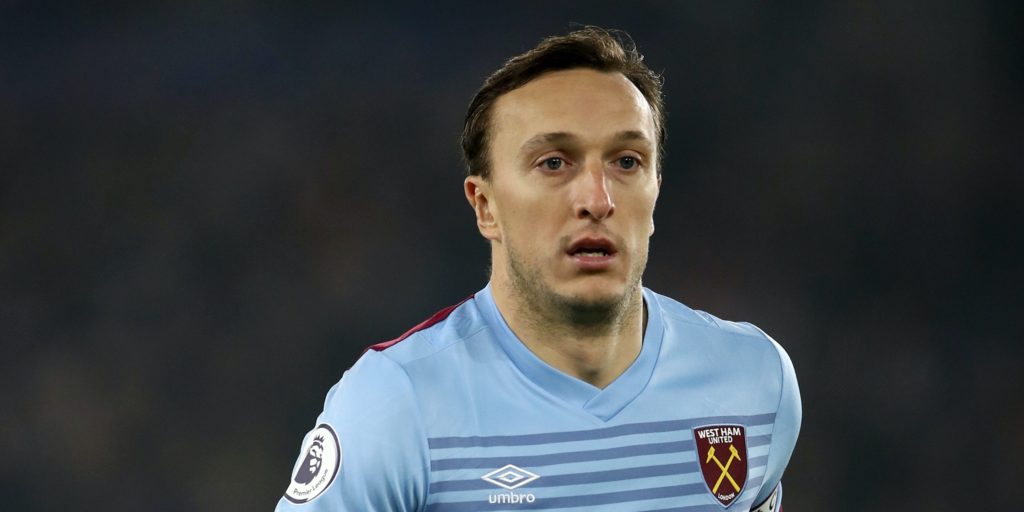 The 33-year-old midfielder will reach 500 West Ham appearances if he plays in Friday’s clash with Watford at the London Stadium.

West Ham boss David Moyes has hailed Mark Noble ahead of the skipper potentially making his 500th appearance for the club.

Noble will reach the milestone if he plays in Friday’s clash with Watford at the London Stadium.

And Moyes said of the 33-year-old midfielder, who made his senior debut in 2004: “I think now to get 500 games for any club, you have to give him great credit for that.

“He’s been a one-club man and served the club incredibly well, since being a young player to where he is now – still leading the group, still very vocal, still playing very well. Long may it continue.

“We’ve had some great players here having many games like that – Billy Bonds, Sir Trevor (Brooking), Bobby Moore. I think for Mark to get to 500 games for West Ham is a great achievement.

“He’s captain, a really important player for us, important in the dressing room, and I think West Ham should consider themselves lucky to have such a good player but also a really good man around the club. I hope he can work towards getting another 100 or 200 games.”

West Ham – who have won two and drawn one of their last four matches – and Watford are currently level on 34 points in 16th and 17th place in the Premier League respectively, with three fixtures to go each.

Asked if Friday’s contest was a winner-stays-up match, Moyes said: “I’ve not actually thought that way, but obviously I know another win for us will certainly put us in a really good position.”

He added: “I think we’re in a good place, playing quite well and quite comfortable with what we’re doing.

“We know the importance of the game. The good thing is I’ve been here before. The last time we were here (when he was in charge at West Ham in 2017-18), in the last three games we won at Leicester, drew with Manchester United and won against Everton.

“So if we take something similar in points, I’ve no doubt we’ll be a Premier League club.

“We’ve got our noses slightly in front, and we have to try to stay out in front. We have to do everything to be in that position.

“We’ve not done the job, far from it. The players are aware of that. We have to at least win another game, who knows it could be more. I think the most important thing is focus on the next game, try to win that one and see where it takes you.”

Regarding the chances of Robert Snodgrass (back) and Felipe Anderson (hamstring) being involved on Friday, Moyes said: “Snodgrass is less likely. He has done a little bit of training. Anderson has done a bit more so he’s getting a bit closer, and obviously he’s only been out for a couple of weeks.

“Snodgrass has been out all through lockdown and also since the resumption, so to get him back in the last week or two is going to be some going I think.”