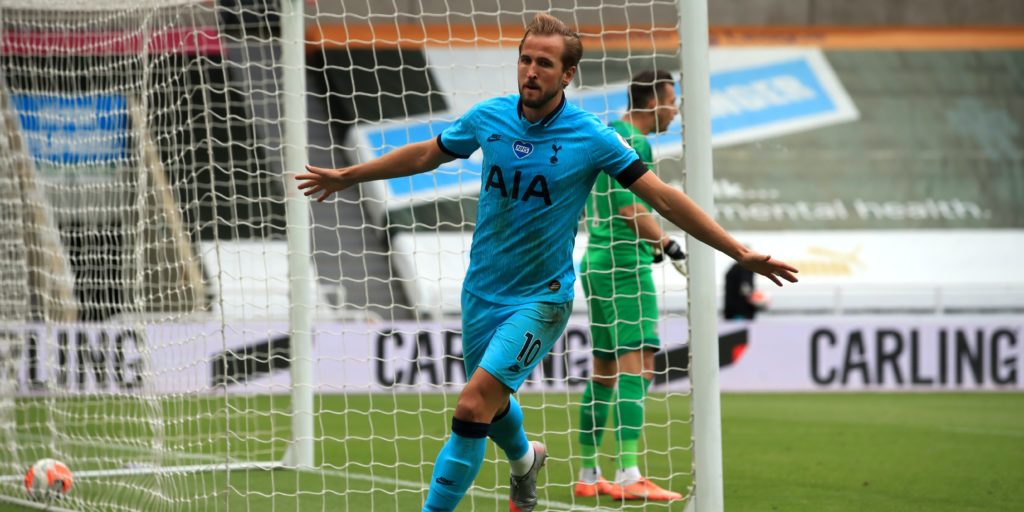 The England skipper scored twice at Newcastle on Wednesday evening.

Tottenham striker Harry Kane has vowed to make up for lost time as he targets a second double-century of goals.

The England skipper reached 200 career club goals with his double in a 3-1 Premier League win at Newcastle on Wednesday evening, in the process recording 20 goals in all competitions for the sixth successive season.

However, the 26-year-old is not about to pat himself on the back with two games of the season remaining.

He told Spurs TV: “It’s a nice milestone to hit, but as always when I’m told about these milestones, it’s always on to the next 100 or 200.

“It’s gone quickly – I’ve been a professional now for eight or nine years and it just flies by.

“In the last couple of years I’ve had a few injuries as well, and they’ve kept me out of quite a lot of games.

“[20 goals a season] is a nice, consistent level I’d like to keep at and I’m happy to do it again this season. Two more games to go, let’s see how many more we can get.”

More Kane goals against Leicester on Sunday and Crystal Palace next weekend could prove crucial if Spurs are to achieve their aim of Europa League qualification, and he believes they will need to win both matches to do so after following up their derby victory over Arsenal with another success against the Magpies.

Kane said: “It’s a massive win. We said before, three games, it has to be three wins if we want to have a shout of the Europa League.

“It was a difficult game away from home, they’re not an easy team to play against. We probably didn’t have our A-game, but we managed to find a way and we were obviously delighted to come away with the three points.

“That was a big win in the north London derby, it gave us a load of momentum going into these three final games.

“Some of the teams have got to play each other around us, so I would imagine two more wins and we should be in the Europa League places. But we can only take care of ourselves and wait to see what happens.”

Son Heung-min opened the scoring at St James’ Park, but the home side were back in it 11 minutes after the restart courtesy of Matt Ritchie’s blistering strike.

However, it was then that Kane took over, heading the visitors back in front on the hour and then helping himself to his 15th league goal of the season at the death.

For the Magpies, who had already lost skipper Jamaal Lascelles for what remains of the campaign after he underwent ankle surgery on Tuesday, there was further misery when fellow defender Fabian Schar suffered a suspected dislocated shoulder and forward Allan Saint-Maximin damaged a calf muscle, leaving them with only nine men on the pitch at the final whistle.

The defeat was Newcastle’s third on the trot and neither his goal nor an enterprising display for much of the game came as much comfort to specialist midfielder Ritchie, who lined up at left wing-back.

He told NUFC TV: “You want to win games and pick up points and move up the table, and we’ve not done that the last few weeks.

“It’s a little kick up the a*** because going into next season, we’re certainly well aware that if you’re not at it, you don’t take your chances and you do leave yourselves that little bit open in this league, you get punished.

“It’s all good playing well, but this game is about results.”