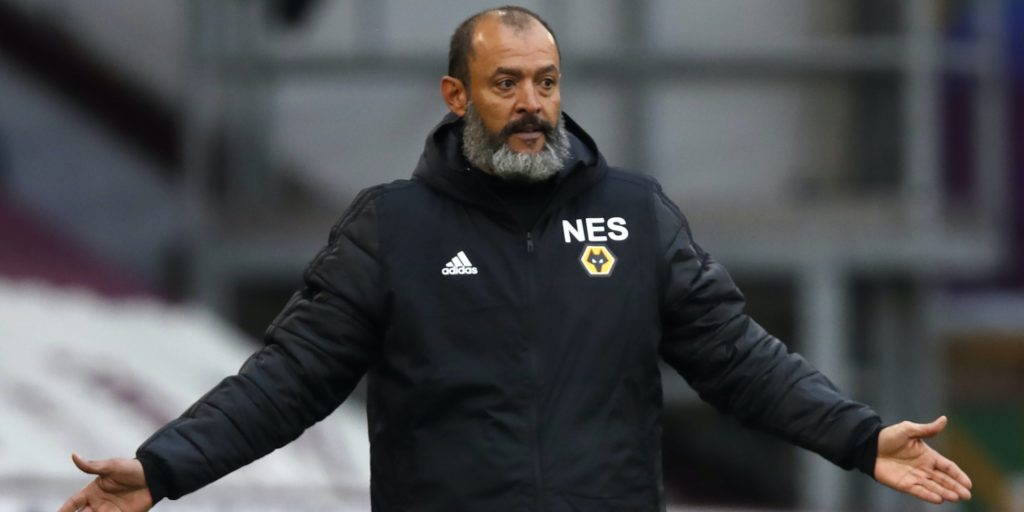 The result leaves Wolves three points off the top four, having played a game more than Leicester and Manchester United.

Nuno Espirito Santo wants his Wolves players to quickly move on after Chris Wood’s stoppage-time penalty put a dent in their Champions League hopes as they were held to a 1-1 draw at Burnley.

Raul Jimenez struck his 26th goal of the campaign with a quarter of an hour to go at Turf Moor as Wolves sought to put pressure on Leicester and Manchester United above them in the battle for European places.

But there was late drama as Wood first missed a sitter of a header before Matt Doherty was penalised for handball and the New Zealander fired into the top corner of the net.

It was a frustrating end to the night but Nuno had no complaints about how his side performed.

“We just recover and prepare for the next one,” Nuno said.

“The first half was good, the second half was good. We were always in control very, very well in the middle of the park, pressing high, recovering the ball.

“We didn’t allow Burnley to play, they would always go direct but we controlled it well deep. The team was good.”

The result leaves Wolves three points off the top four, having played a game more than Leicester and United, but also under pressure from behind, with Spurs one point back and Sheffield United two back in seventh.

Wood’s late strike extended Burnley’s unbeaten run to six games, and it is now only one defeat in 14 for Sean Dyche’s men.

Failure to win effectively puts an end to any lingering ambitions they had of sneaking into the Europa League places, but a top-half finish would be a fine achievement for a team that has faced a host of issues on and off the pitch since the season resumed.

It was Wood’s 12th goal of the campaign, and first since the restart with the New Zealander having initially been sidelined with an Achilles problem.

“We were waiting for that one chance and luckily it came for me at the end, especially after putting the header wide,” Wood said.

“I thought I had waited all that time for one chance and not put it away so it was nice to make amends for that.”

But the point may have come at a cost for the already short-handed Burnley, with left-back Charlie Taylor hobbling off in the first half before striker Jay Rodriguez was withdrawn shortly after the break.

“It is his (Taylor’s) hamstring,” Dyche said. “I will find out more in the next day or two.

“It is a blow for us, we are already skinny on numbers.

“Jay Rod I am bit more hopeful with because that was me being cautious. He said he had a tight calf at half time and we can’t afford to keep losing players so we had to get him off. Hopefully that one will be OK.

“But this group, the challenges keep coming but they just keep getting on with it so I couldn’t be more pleased for the players and what they are putting in and the rewards they are getting.”