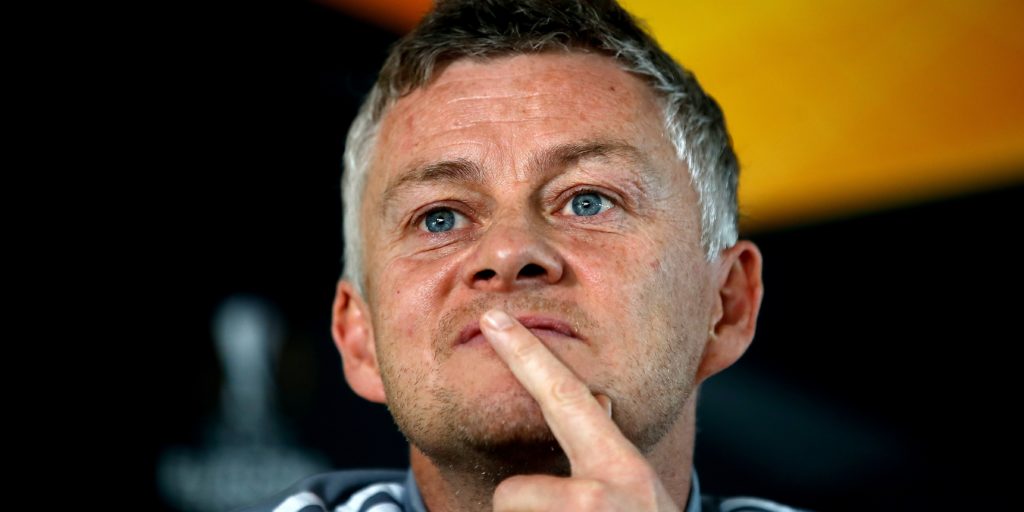 Fixture schedule does Manchester United manager few favours in his quest for a satisfying finish to the campaign.

The 1999 treble hero won numerous trophies with the club during his playing days but has yet to seal silverware during his time in the Old Trafford dugout.

United are the bookmakers’ favourites to lift next month’s Europa League, when they could complete a double if they can make it past Chelsea and go on to win the FA Cup.

But Solskjaer’s side head into Sunday’s Wembley semi-final at a disadvantage due to the scheduling.

While Chelsea played Sheffield United on Saturday and won 1-0 against relegated Norwich on Tuesday, United head to Wembley on the back of Monday’s 2-2 draw with Southampton and a trip to Crystal Palace on Thursday.

“There is a concern, obviously, that they’ve had 48 hours’ more rest and recovery than us,” Solskjaer said. “It’s not fair.

“We spoke about a fair scheduling going into this restart. Of course it isn’t.

“But I have to think about Thursday. We’ve got to win that one, focus on that one, and then let’s pick up the pieces after that.”

Solskjaer said Sunday’s match was “irrelevant” when it came to his selection at Selhurst Park but the scheduling might not be as United look to balance their Champions League chase with their FA Cup tilt.

“We’ve not really played every three days – we will now, definitely,” said the United boss, who has to assess the fitness of Mason Greenwood, Luke Shaw and Brandon Williams.

“The next two weeks will be hectic but, then again, we’re fit. Very fit. Our lads have not felt as fit as this for years, I’m sure.

“It was a big thing towards the end of last season that we felt our team wasn’t fit enough, we got a few injuries. This season we’ve not had that kind of a problem.

“No, it’s not going to be a problem and a concern for us but 24 hours, 48 hours is a big difference at this time as well.

“We’ve not been handed four aces, to put it that way, in the last two weeks. But we’re going to have to put up a poker face and play the cards well.”

Paul Pogba has been one of the first names on the team sheet and could play his eighth match since the restart against Palace – as many appearances as he managed during an injury-ravaged season before the suspension.

“I’ve been speaking more or less every day with Paul,” Solskjaer said.

“But he’s been out for a long, long time. There was a question mark before this game (against Southampton).

“‘How do you feel?’ and he felt ready for it and that was great, so now let’s see how he is today or even tomorrow morning.

“He’s been fantastic since the restart and brought a lot to the team.

“There were one or two question marks before the Southampton game about who was going to play but we made the decisions that we did.”

Solskjaer was less forthcoming when it came to the lifting of Manchester City’s European ban and Pep Guardiola’s comments about his club being unable to compete financially with United for Harry Maguire and Alexis Sanchez.

“My concern is what we can do and not what others can do,” Solskjaer said. “If other teams can compete with us, fine. If they can’t, fine.

“We just have to run this club as well as we can.

“Of course the other clubs, we’re too far behind. We’ve got a smaller amount to climb than last year but there’s still a mountain to climb, to climb the table.”