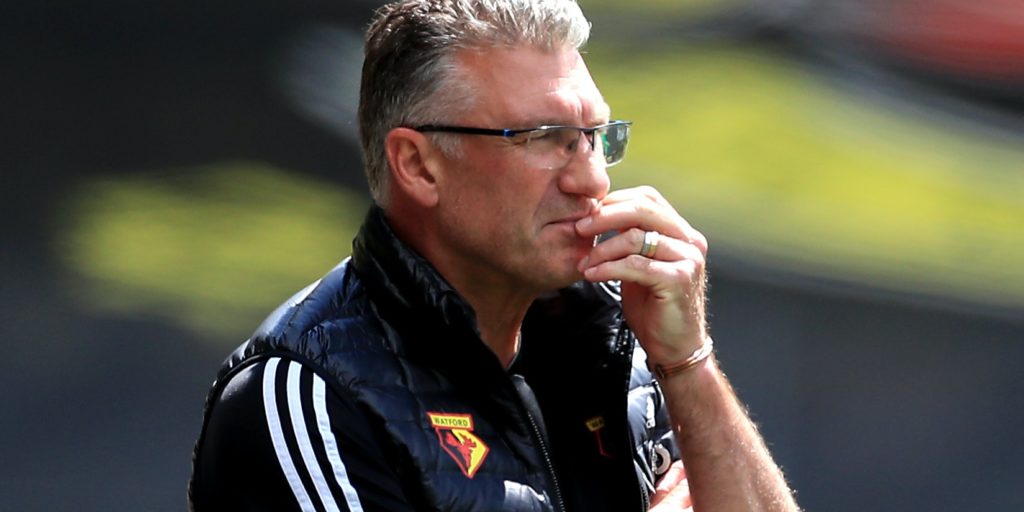 Watford and West Ham are on 34 points ahead of the game at the London Stadium on Friday, three above Bournemouth who sit in the relegation zone.

Nigel Pearson has warned his Watford players not to get caught up in the occasion when they face West Ham in a critical relegation scrap on Friday night.

The two teams sit level on 34 points just above the bottom three, and victory for either could all-but secure their survival. Defeat, however, would leave them vulnerable to Bournemouth and Aston Villa below.

“On the face of it there’s an awful lot of riding on it, but it’s also important that our players are able to go out there and free themselves up and play,” Pearson said.

“When you’re under pressure that can certainly affect lots of different aspects of performance, but collectively we’ve shown a real resilience.

“The emphasis for tomorrow will be that we need to perform well as a team. We need to be calm enough but that doesn’t mean you don’t play with a passion, a drive and a commitment. It’s getting the balance right, but we know it’s a big game.”

Back-to-back victories over Newcastle and Norwich have left Watford in charge of their own future but with games against Manchester City and Arsenal to finish, Friday’s trip across London appears to be their best chance to get three points.

“It’s a game in which both sides would have a huge benefit if we win, but the three games we have left are all opportunities,” Pearson said.

“This is our next game. Clearly this is a game where both sides have a huge amount to gain by winning, but I’m not going to classify games as more important than others.

“It’s very important for us, like every game. We just need to make sure our commitment to having that positive intent is there, and we do what we can to win the game.”

West Ham have also enjoyed a timely upturn in form, with a 4-0 rout of relegated Norwich making it seven points from their last four games, making Friday’s game an intriguing battle between two apparently evenly-matched teams.

“They’re doing what we’re doing and fighting for their lives,” Pearson said. “They’ve got good players and they’ve found some decent form of late and we know it will be a tough game.

“We’ve managed to secure two wins in the last week as well in difficult games ourselves. “I would say probably in slightly different circumstances because we’ve won two games 2-1 having been behind in both games, so we’ve had a bit of an uphill task but the players have dealt with that situation well.”

When Pearson took over as manager in December, he inherited a side with only one win all season, six points from safety and already written off by many.

But he is now in with a chance to complete yet another escape act, having beaten the odds to avoid relegation with Carlisle, Southampton and Leicester.

“It’s not a conscious thing that I think about,” he said. “It’s much more about staying very much in the moment and dealing with things as they come along.

“We’re aware of what we have to do. I think from the position we found ourselves halfway through the season, we’ve given ourselves a fighting chance. Thinking about that period now we’d have taken the position we’re in now.

“It’s important we don’t think too much about what happens elsewhere. It’s about trying to get over the line ourselves, and we’ve got three more opportunities to do that.”