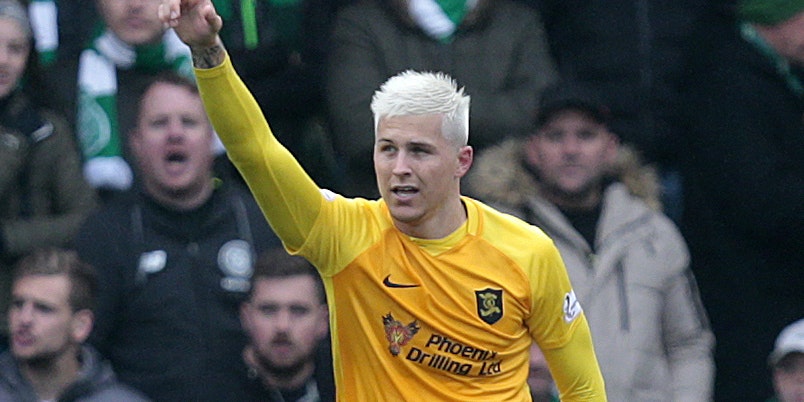 Striker Lyndon Dykes has been linked with a move away from the club.

Gary Holt does not believe Scotland’s extended transfer window will derail Livingston’s start to the season.

Instead, the Lions boss hopes interest in the likes of striker Lyndon Dykes will spur his team to a quick start when the new Scottish Premiership kicks off next month.

The Scottish Football Association has confirmed the window will shut at midnight on August 5 as a result of the disruption caused by the coronavirus pandemic.

But with the new deadline set a month later than usual, it means managers holding on to sought-after talents will have to contend with the distraction of transfer speculation for longer.

Dykes has been strongly linked with Rangers all summer after the former Queen of the South forward netted 12 times during his debut top-flight campaign.

Holt confirmed there has so far been “zero” expressions of firm interest in the Australian-born hitman – but also says he will not loose sleep even if suitors come calling in the days leading up to the window’s close.

He said: “I’m not bothered about it. I can’t stop people being interested.

“That happens – but only when you’re playing well. It’s as simple as that.

“It’s very rare that someone comes looking to buy your players when they’re not playing.

“So the extended window just gives us opportunity to impress even more in the early part of the season and the players a chance to showcase their talent.

“There’s zero interest (in Lyndon). We are where we are. It’s not changed.”

If Holt does eventually have to say goodbye to Dykes, he hopes Salim Kouider-Aissa will grasp his big chance to become his replacement.

The 24-year-old is sampling his first taste of full-time football just 14 months after leaving the junior ranks.

But Holt has been impressed by what the former Queen’s Park striker has shown already in his first few weeks with Livi.

He said: “You want people who are hungry to come in and who want that opportunity to show that they are good enough.

“We watched Salim play a few times, saw him score some goals and could see he knows where the net is.

“Now it’s about whether he can take that next step and come to this level on a regular basis. He’s not done himself any harm with what he’s shown so far.

“He’s got his foot in the door now and it’s about how he kicks on.

“Salim has to embrace full-time football. But he’s got the chance now and we’re certainly giving him the platform.

“He’s shown up well in the testing and in the training sessions, he’s thrown himself into it.

“He’s suffered and has struggled at times. But that’s about adapting to the demands.

“Salim doesn’t miss the target too often. It’s either a goal or a save, so there’s an end product there.

“He’s taken on board all the information he’s been given on nutrition, on the diet and working in the gym – everything that goes with full-time football – and he’s embracing it.”