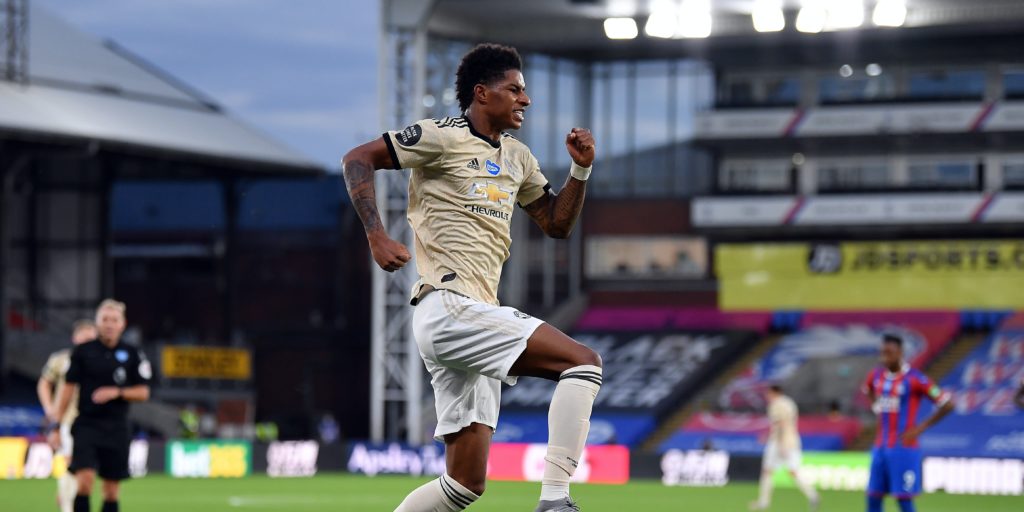 Rashford’s 23rd goal of the season for United help them extend their unbeaten run to 19 games.

Manchester United kept the pressure on Leicester and Chelsea in the race for Champions League qualification with a 2-0 victory at Crystal Palace.

The Red Devils are now back level on points with Leicester and a point behind Chelsea before facing the Blues in an FA Cup semi-final on Sunday.

Palace pushed the visitors hard and would have been left frustrated after Wilfried Zaha was denied a penalty by the video assistant referee, while Jordan Ayew also had a goal disallowed for offside.

United were without left-backs Luke Shaw and Brandon Williams, which opened the door for Timothy Fosu-Mensah to make a rare start.

It was the defender’s first appearance for the Red Devils in 1,152 days and coincidentally his last outing also came at Selhurst Park back on May 2017.

Palace had lost their past five games, but they showed intent from the off with Zaha forcing former team-mate David De Gea into a save inside 90 seconds.

United’s best chances of the opening exchanges were from corners, but Harry Maguire was not able to direct his efforts on target.

A flurry of opportunities occurred after the drinks break, with Zaha heading over from James McArthur’s cross before Mason Greenwood scuffed wide from 12 yards after he had been found by fellow attacker Martial.

Bruno Fernandes picked out Maguire from a corner with 39 played, but the England international headed wide after again getting the better of marker Mamadou Sakho.

Palace hit back and top goalscorer Jordan Ayew stung the palms of De Gea before the Eagles wanted a penalty a minute before half-time when Zaha tangled with Victor Lindelof after a superb run.

Referee Graham Scott waved away appeals while VAR’s Simon Hooper adjudged the Swede to have got a touch on the ball and the host were left even more frustrated when United opened the scoring in the first minute of stoppage time.

Fernandes and Martial combined before the former found Rashford, who coolly cut back to get away from Patrick Van Aanholt and calmly slotted past Vicente Guaita to make it two in two after his strike against Southampton.

Palace captain Luka Milivojevic tested De Gea from a free-kick at the end of the half and 10 minutes into the second period the hosts thought they had levelled.

A stray pass from Fernandes allowed the south Londoners to win back possession. Zaha was found on the left and worked a yard of space against former team-mate Aaron Wan-Bissaka and picked out Ayew at the back post.

The Ghanaian slide home to cue celebrations, but they were cut short after VAR decided the forward was offside by the finest of margins.

Rashford missed the chance to make it 2-0 in the 62nd minute when he fired straight at Guaita before Solskjaer introduced Nemanja Matic and Jesse Lingard.

Hodgson’s side continued to ask questions and Jeffrey Schlupp was called upon with 18 minutes left and rifled wide from range on his first appearance since December 7.

A second goal was forthcoming in the 78th minute and it went to United as Martial made the three points safe.

Rashford spun away from several opponents by the halfway line and was able to lay a pass into the path of Martial, who drilled into the corner for his 22nd of the season.

Van Aanholt suffered an injury in the aftermath of the goal and had to leave the pitch on a stretcher which forced 11 minutes of stoppage time, but there was no way back for Palace and they suffered a sixth straight defeat.