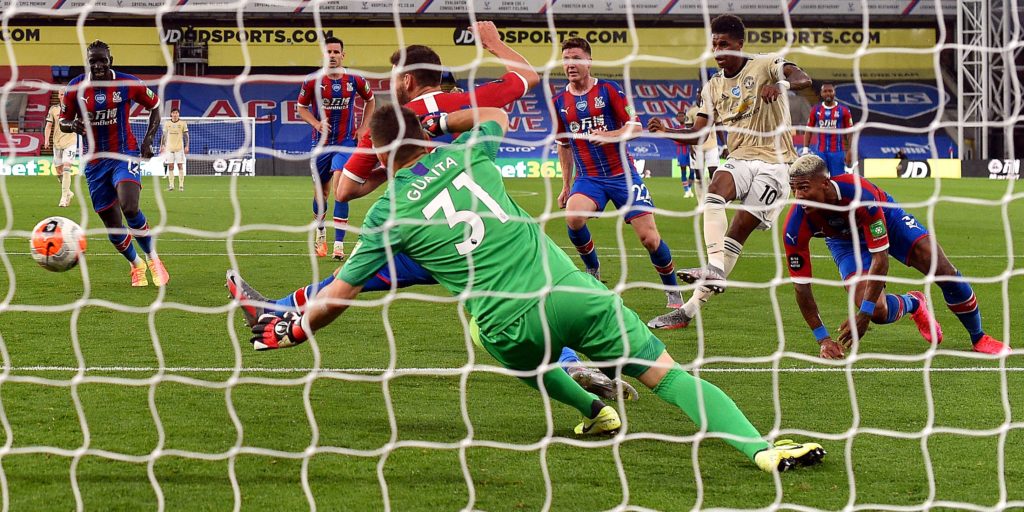 The forward was on target as his side secured a 2-0 victory at Crystal Palace.

Marcus Rashford was relieved to return to winning ways as Manchester United won 2-0 at Crystal Palace in the Premier League.

Rashford netted along with Anthony Martial as United bounced back from drawing 2-2 with Southampton on Monday.

The England forward told BT Sport: “Every game for us now is a big game.

“These kind of victories you get a lot out of as a team. We’ve had to work hard to get a result.

“We’re improving and that’s the reason why we’ve scored so many goals in the last few games.”

Palace boss Roy Hodgson praised his side’s performance but was ultimately disappointed with the result and some of the decisions that went against his men, telling BT Sport: “I think the most difficult thing to take is that we played so well and still lost the game.

“If you ignore the last 10 minutes, when Patrick Van Aanholt had to go off and we had to readjust, up to that point I thought we played really well.

“I thought that we could have so easily been leading in the game and once again we find ourselves on the wrong end of a result after a performance like that. Against a team of Manchester United’s quality it is very, very hard to take.

“There were a couple of issues that could have so easily gone our way.”

Reacting to Palace being denied a penalty and then having a goal ruled offside by the tightest of margins, Hodgson added: “Referees these days, you never see them because they’re miles away, aren’t they?

“I thought that the referee could have easily given the penalty on the field, and he didn’t. Then the people in the office somewhere in Hounslow ruled against that one as well.

“Then apparently the other one was one of those hair-fine decisions, which one finds hard to take.

“Now we have to come to terms with the new reality that you’re celebrating and you think you’ve scored a good goal, one that we tried so hard to score, that type of goal, and then have it taken away from you by some hair-fine decision.

“The important thing for me tonight is that we played so well, that’s good after a performance on Sunday that I wasn’t so pleased with.

“But it’s tough for the players. I feel really sorry for them tonight because if there was ever a game where I should be standing here congratulating them on A, the performance, and B, the result, tonight was the night.”

United manager Ole Gunnar Solskjaer felt his side had been challenged by Palace.

He said: “It was a tight game, we didn’t get the rhythm in our passing but two fantastic goals won it for us. They are a handful to play against, I’m glad I’m not a defender playing against them.”

“We then needed that second goal, that’s when they started strutting about and playing as well as they can. Of course it’s tight but we can’t afford starts like this.”