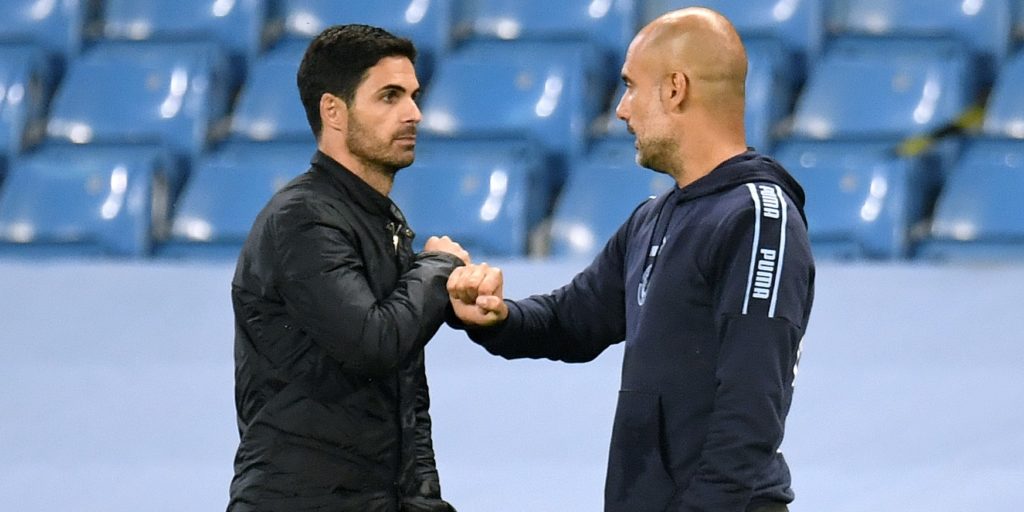 The Gunners have lost seven straight games to City.

Mikel Arteta said he would be “depressed” if he focused too much on Arsenal’s recent record against the top clubs as he prepares for an FA Cup semi-final clash with Manchester City.

The Gunners head coach needs to rewrite recent history if Arsenal are to beat holders City at Wembley on Saturday.

Pep Guardiola’s side have won the last seven meetings between the two sides – with Arteta part of the coaching staff at the Etihad Stadium during the one-sided run.

Arsenal’s last victory in the fixture was the FA Cup semi-final meeting in 2017 and since then they have lost seven games, shipping 20 goals and scoring just twice.

But – after ending a similarly wretched run against Liverpool by beating the Premier League champions 2-1 on Wednesday night – Arteta is keen not to dwell on past results as he aims to secure a place in the final.

Asked if he was worried by the recent trend against City Arteta, who won two FA Cups as a player at Arsenal, replied: “Yes.

“But if I look at the trends as well before we played Liverpool, with the calendar year or the last two calendar years that they’ve had, you get depressed.

“What I need now is energy to transmit to my players, belief and it’s the FA Cup – we have a lot of experience here and we have a history related to that. Let’s go for it.

“I want to focus on what we want to do. If I worry too much about them, it’s not the message that I want to send to the players.

“It’s what we are going to do and what we have to do to try to win the game, to give us the best chance to compete against them throughout the 90 minutes and put them under difficulties.

“That is what I will do and that is the game plan we always put against every team.”

While they were arguably lucky to beat Liverpool, with both Arsenal goals in the 2-1 win coming from defensive errors, Arteta wants to use the result to set up another surprise victory on Saturday.

He said: “We had a really good reaction after the goal (conceded against Liverpool). It’s not easy because they are such a dominant team, so I’m really pleased with the result that we got.

“They’re going to be very different games and it’s going to happen tomorrow as well, you cannot expect to be dominant for 90 minutes. I don’t want to be defending deep for 90 minutes either.

“There are going to be a lot of little games within that game that we have to play. We’ll have our moments as well and you know how crucial it is in big games and in this competition to make the right decisions.

“I expect not a similar game but the level of difficulty will again be really, really high.”

With the wealth of quality at Guardiola’s disposal, it is always difficult to predict the City manager’s starting XI.

David Silva is winding down his decade-long stay at the club and will be hoping to be involved.

Having worked at close-quarters with his fellow Spaniard, Arteta knows just how good the 34-year-old is.

“If I could read the articles and the comments when he joined the Premier League, they were saying that player is so small, he doesn’t have the physicality, he won’t adapt,” added Arteta.

“What David has done in this league has been incredible. Again, the level of consistency to play the way he has done with the amount of goals, assists and chances that he creates every single
season, in tight spaces against very low blocks, time and time again, is incredible.

“I always said – and I agree with what Pep said – in shorter spaces, he’s the best player that I’ve seen.”

Arteta also confirmed Mesut Ozil has returned to training having missed the last six games with what the club have described as “back soreness” – but he refused to say whether Arsenal’s highest-earner would feature at Wembley.