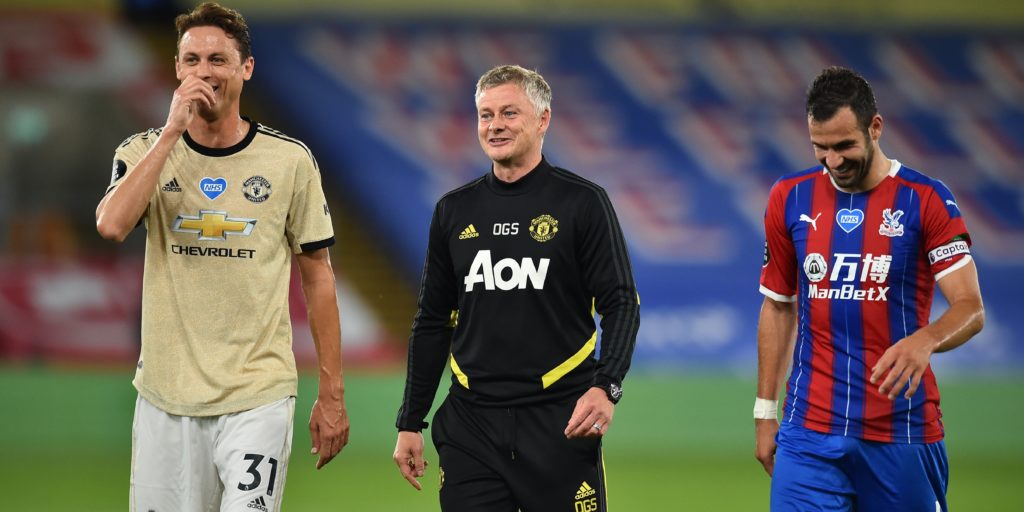 Manchester United are level on points with Leicester, but behind the Foxes on goal difference.

Ole Gunnar Solskjaer was pleased to see Manchester United recover from a slow start to remain in the hunt for Champions League qualification with a 2-0 win at Crystal Palace on Thursday.

Marcus Rashford opened the scoring in first-half stoppage time and he also produced a wonderful piece of skill to help Anthony Martial wrap up the contest late on.

It ensured the Red Devils moved back level on points with fourth-placed Leicester, who were able to get the better of Sheffield United earlier in the day.

Solskjaer said: “It had to be better than the first half and they showed it, especially after the drinks break.

“The last 20 to 25 minutes we played some controlled stuff, but today was about getting three points again. We are at that stage of the season where you don’t get extra points for how it looks.”

Rashford scored in a second consecutive game following his effort at home to Southampton on Monday and was a constant threat at Selhurst Park.

He managed to dribble away from three Palace opponents in the 78th minute before laying the ball into the path of Martial, who struck into the bottom corner for his 22nd goal of the campaign.

“Marcus is just enjoying himself and his football,” Solskjaer added.

“Him and Anthony together link really well off each other and when I can see those boys with that body language, smiling and positive, I am delighted.”

The Red Devils boss handed a rare start to Timothy Fosu-Mensah, with left-backs Luke Shaw and Brandon Williams out with ankle and head injuries respectively.

Scott McTominay also started in place of Nemanja Matic as Solskjaer made changes to his line-up for the first time in six games.

With an FA Cup semi-final to come against Chelsea on Sunday, plus the latter stages of the Europa League to play in August, the Norwegian was asked if his squad can cope with the fixture pile-up.

Solskjaer insisted: “We are fine. We are fit and the players are raring to go and want to play again.

“Of course anyone can hold their hands up at any moment and say I want to sit out this one. We have players on the bench desperate to join in.

“We were forced with Brandon and Luke not available, but Timothy did great and Scotty has been fantastic. He took a shift for Nemanja.

“We have had a chance over this period to take players off when we have been three up in many games after 60 minutes, so we have been fortunate in that respect.

Simon Hooper was the man in place at Stockley Park and he adjudged Victor Lindelof to have got the ball when Wilfried Zaha went down in the penalty area in the 44th minute.

VAR was also required when Jordan Ayew slid in Zaha’s cross with 55 minutes on the clock and it ruled the forward to be marginally offside.

“Certainly we are not fortunate at the moment. The Gods of fortune are not smiling on us with certain decisions,” Hodgson said.

“We have won games and got good results against top teams like Man United playing a lot worse than we did tonight.”