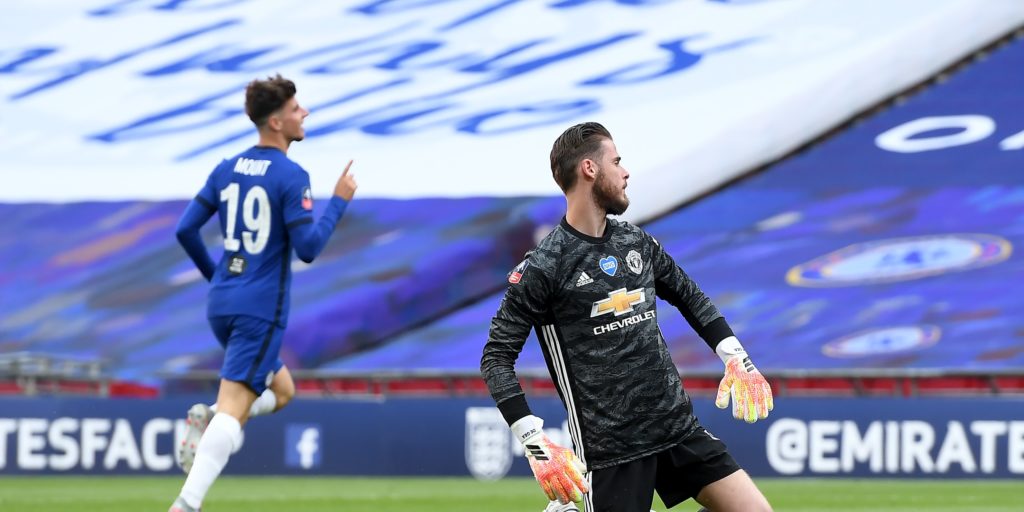 Olivier Giroud and Mason Mount put the Blues in the driving seat at Wembley before Harry Maguire’s own goal.

Ole Gunnar Solskjaer and Frank Lampard put their Premier League top-four battle on the backburner for the day as the club greats focused on securing the chance to bid for more of the sort of silverware they collected so much of during their playing days.

United had won the season’s previous three meetings between the sides but Chelsea comprehensively triumphed in Sunday’s semi-final, with De Gea in the firing line after his role in Olivier Giroud and Mason Mount setting up a 3-1 win.

Solskjaer could have few complaints after seeing his side’s 19-match unbeaten come to an abrupt halt in the capital, where the United manager’s decision to change the system and make five alterations backfired.

De Gea was among those to retain their places as cup goalkeeper Sergio Romero was spurned and the United shot-stopper will have been disappointed not to prevent Giroud flicking past him after too easily beating Victor Lindelof.

That goal came 11 minutes into first-half stoppage time, played due to Eric Bailly having suffered a nasty-looking head injury, and Chelsea compounded matters 43 seconds into the second half at an empty Wembley.

De Gea will have nightmares about Mount’s low shot creeping past him, with captain Harry Maguire’s own goal summing up a poor performance on a night when Bruno Fernandes’ penalty proved scant consolation.

Chelsea fully deserved victory and will now face Arsenal in the FA Cup final on August 1.

Lampard’s men looked sharper from the outset and Solskjaer may well point to their extra 48 hours’ rest, but his selection of tired players alongside rusty ones certainly had an impact.

Both sides deployed three-man defences flanked by marauding full-backs and Chelsea’s were more effective, with Reece James forcing De Gea into an early save before Marcos Alonso wasted a fine chance.

United were unsettled by the Blues’ pressing and Olivier Giroud’s hold-up play, with Fernandes’ 32nd-minute free-kick the best they could muster in a timid first half.

Chelsea were on top and Kurt Zouma headed over a deflected cross. Bailly required treatment after a painful blow when attempting to prevent that opportunity and would not see out the half after a sickening clash with team-mate Maguire.

The latter was bandaged up after heading Bailly when trying to clear in the 42nd minute, leaving the Ivory Coast international in a bad way.

Able to groggily trundle off the pitch after lengthy treatment, Bailly was soon on his back and being tended to by concerned medical staff on the sidelines.

Both sets of players applauded when he was eventually wheeled off on a stretcher, before Chelsea made their first-half pressure tell during the extended stoppage time.

After Zouma avoided punishment for catching Anthony Martial as he entered the box, Giroud all too easily got ahead of Lindelof at the other end to prod Cesar Azpilicueta’s cross home 11 minutes into stoppage time.

De Gea did not cover himself in glory and was guilty of a shocker within a minute of the second half.

Hopes of imposing themselves on the semi-final went up in smoke as Mount collected a wayward Brandon Williams pass and the United goalkeeper somehow let a long-range strike through his grasp.

Marcus Rashford fired across the face of goal as United attempted to quickly claw one back, with Solskjaer turning to substitutes Mason Greenwood and Paul Pogba.

But the Red Devils were producing precious little and Mount flashed over, with De Gea stopping a deflected Giroud attempt as Chelsea looked to rubberstamp their date with Arsenal.

De Gea also stopped James but United failed to effectively clear, with Maguire directing past his own goalkeeper as he tried to stop Antonio Rudiger reaching a cross from Alonso.

That 74th-minute goal ended any faint hopes of a comeback and play petered out, even after Fernandes scored a late penalty after Callum Hudson-Odoi hacked Martial down in the box.