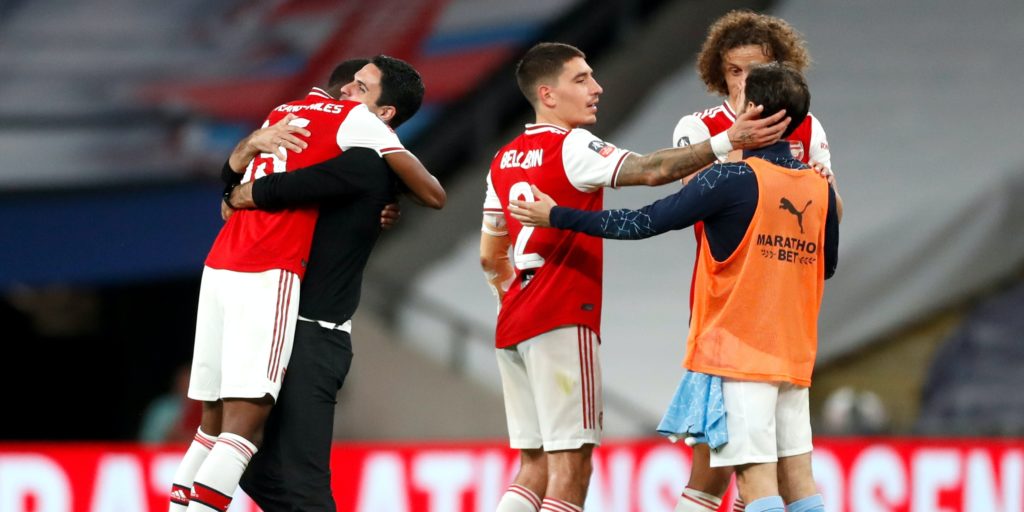 Arsenal manager Mikel Arteta believes a place in the FA Cup final is no less than his players deserve as they booked a trip to next month’s Wembley showpiece with a 2-0 win over holders Manchester City.

Pep Guardiola’s City were heavy favourites to win the semi-final at Wembley but Pierre-Emerick Aubameyang struck in either half to secure victory for the Gunners.

The record winners of this competition, Arsenal will now be looking to lift the FA Cup for a 14th time when they face either Chelsea or Manchester United in the final on August 1.

And Arteta had nothing but praise for his team’s overall performance.

He told BT Sport : “I’m extremely happy and proud of our players, but it’s very sad we cannot enjoy this moment with our fans and enjoy watching the team and achieving the final.

“We have great chemistry, they really believe in what we are trying to do and you can sense that. They deserve it, everyone on the pitch.”

Arsenal had lost their last seven games against City prior to this win and Gunners defender David Luiz put their change in fortunes down to a sense of humility within the squad.

Luiz said: “It was a great result against one of the best teams in the world.

“We did it because we were humble and we understood the way we have to play and we took the opportunities to score.

“We have to be mature and understand the level we are at and where we are in the process. It’s a good process, we have an amazing coach and he wants to bring us the best football but it’s not zero to 100.

“We have to improve but the spirit was great and I am happy for the team.”

Luiz impressed throughout, in stark contrast to the last meeting between the teams in June when he was sent off in a 3-0 defeat.

“I was working hard every single day after my mistake. I took the blame, I was mature enough to understand that and also humble enough to work more for the team.

“Now we have a final to play and we will try to win this title for the club because this club deserves to shine again.”

Guardiola cut a frustrated figure after the loss and admitted he was disappointed with the performance of his team, who squandered both possession and chances.

“When you play like we did in the second half maybe you can lose but we didn’t play good. On a day when you have to, we didn’t.”

City must now put their focus on the Champions League, and the second leg of their quarter-final against Real Madrid on August 7.

“Now we have two weeks,” Guardiola said. “We wanted to play the (FA Cup) final one week before the Madrid game to be in rhythm, but we missed this chance.”