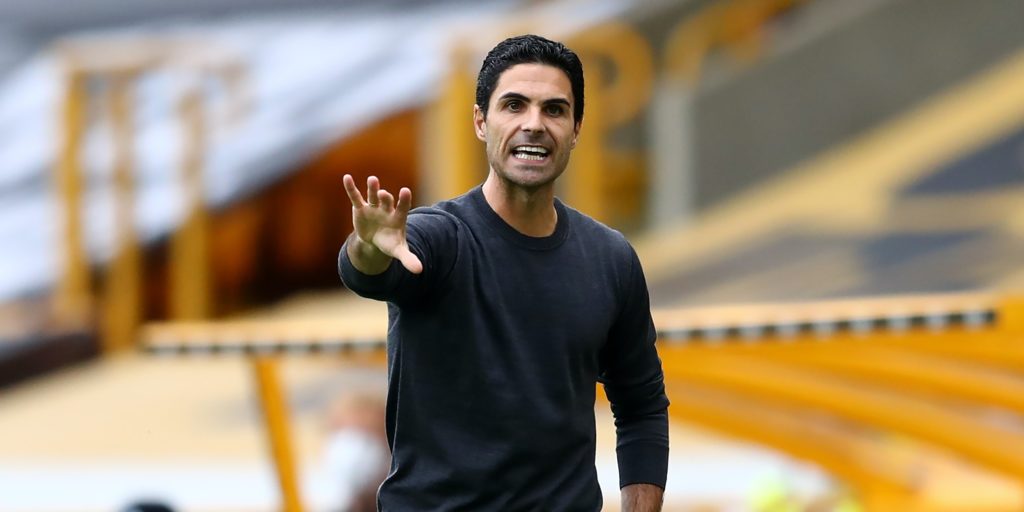 The Spaniard has led the Gunners to the brink of silverware.

Arsenal secured their place in a record 21st FA Cup final with victory over Manchester City at Wembley on Saturday.

The 2-0 win came on the back of a rare success against Premier League champions Liverpool as head coach Mikel Arteta continues to stamp his authority on the club.

Here, the PA news agency answers some of the key questions as to how Areta is improving the fortunes of the Gunners.

He has changed system lately, hasn’t he?

Yes, and it seems to have done the trick in recent weeks.

Arteta has switched to a back-three, a system which got the best out of David Luiz during Antonio Conte’s title-winning season at Chelsea.

Luiz has benefited from the change at Arsenal, too, with Kieran Tierney excelling alongside him as the left-sided member of the three-man defence.

With the likes of Hector Bellerin, Cedric Soares, Sead Kolasinac and Bukayo Saka as the options at wing-back, Arteta can also expect plenty of pace down the flanks and enough defensive guile to help out at the back when required.

The 3-4-3 system does mean Pierre-Emerick Aubameyang is likely to start from the left rather than centrally, but he has hit the vast majority of his 25 goals this season from that side.

But what about his decision to drop Guendouzi and Ozil?

Both Matteo Guendouzi and Mesut Ozil have found themselves ostracised from the Arsenal squad in recent weeks, two big calls for Arteta to make – for differing reasons.

Signed from Ligue 2 side Lorient in 2018, Guendouzi established himself as an Arsenal regular surprisingly quickly but the 21-year-old’s attitude was called into question after the defeat at Brighton last month.

Arteta acted swiftly and Guendouzi has not been involved in a matchday squad since, reportedly training alone and almost certain for a summer exit if things are not patched up.

Ozil, meanwhile, enjoyed a run in the side when Arteta first took charge but he has also been sidelined.

The highest earner in the history of the club, Ozil has not kicked a ball since the season restarted and Arteta will not be drawn into the reasons behind it – with the change of shape making a return for the GBP 350,000-a-week playmaker even more unlikely.

So, are they both finished at Arsenal?

Not necessarily. And that leads well into the next point – Arteta’s ability to find the best role for midfielder Granit Xhaka.

Xhaka was stripped of the captaincy by Unai Emery after swearing at supporters as his rocky relationship with the club continued.

Ever since his arrival in 2016, under both Arsene Wenger and Emery, his contribution to the team has been questioned – but Arteta has found the best way to deploy the Switzerland international.

He has even sported the captain’s armband on occasion and, if fans were allowed inside stadiums at the moment, he would likely have won plenty of them over.

Hardly. Xhaka has certainly played his part but it is in forging a fine understanding with midfield partner Dani Ceballos that Arteta has hit gold.

With Guendouzi cast aside and Lucas Torreira only just fit following an ankle injury, Xhaka and Ceballos have taken their chance to build an understanding which is benefiting the team as a whole.

On loan from Real Madrid for the season, it took Ceballos a long time to adjust but he has been in superb form of late – prompting Arteta to admit he would love to retain his services.

With a level of passing unrivalled in the Arsenal ranks, the 23-year-old has started to show his worth and, having been in and out of the team earlier in the campaign, has missed just 57 minutes of Premier League football since the season resumed.

That is defence and midfield – what has he changed in attack?

Pierre-Emerick Aubameyang will always be the go-to man for goals in this Arsenal side and that has not changed under Arteta.

However, the head coach has started to get more out of Alexandre Lacazette of late – with the France striker improving his all round game as well as finding the net on a more regular basis.

Lacazette’s strides have been pushed along by the fact Arteta was not afraid to drop the forward in favour of Eddie Nketiah – the England Under-21s international becoming a vital member of the squad after spending the first half of the season on loan at Leeds.

That genuine competition means both Lacazette and Nketiah know they have to be at their best to stay in Arteta’s starting line-up.