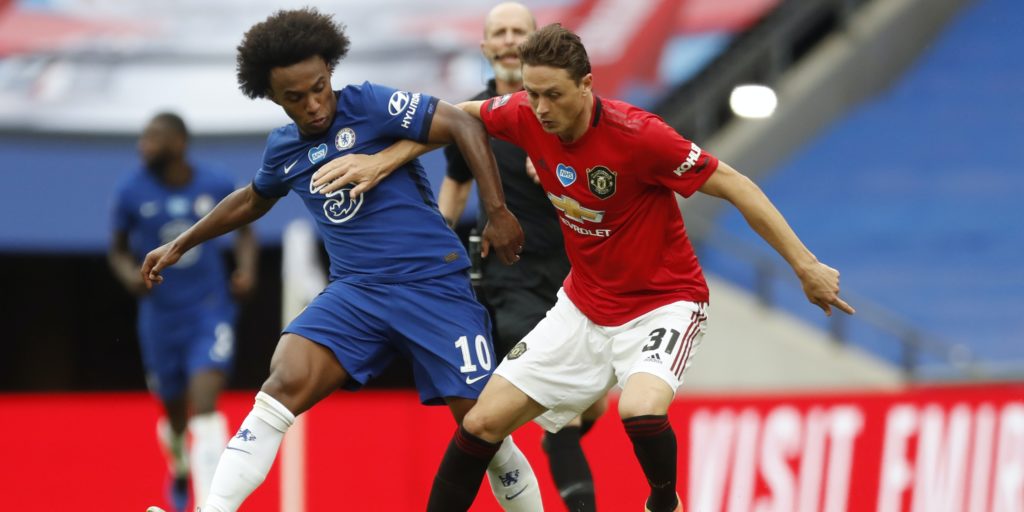 Ole Gunnar Solskjaer’s side saw an impressive 19-match unbeaten run in all competitions come to a crashing end.

Nemanja Matic underlined the need to cut out costly errors as Manchester United’s attention turned from FA Cup disappointment to their Champions League charge before even leaving Wembley.

Ole Gunnar Solskjaer’s side saw an impressive 19-match unbeaten run in all competitions come to a crashing end at an empty Wembley on Sunday, when Chelsea deservedly secured a 3-1 semi-final triumph.

Meek United put in an uncharacteristically disjointed display under the arch, where Olivier Giroud all too easily beat Victor Lindelof to turn home a cross deep in first-half stoppage time.

David De Gea did not cover himself in glory for the opener and was guilty of a shocker within a minute of the second half as Mason Mount’s long-range strike somehow beat him.

United captain Harry Maguire’s own goal summed up a difficult day that midfielder Matic knows was not good enough.

“We always want to win and it’s exactly what we tried today, but this is football,” he said.

“You don’t win always, sometimes you don’t have your day, you don’t play well and this can happen.

“But we know what we are playing for, so in the future we cannot allow to concede three goals like we conceded today and I am sure we will learn from this.”

The only positive for United on Sunday was top-four rivals Leicester losing 3-0 at Tottenham, meaning they are not only level with the fourth-placed Foxes on 62 points but goal difference as well.

The pair will go toe-to-toe at the King Power Stadium when the Premier League comes to an end next weekend, but before that Solskjaer’s fifth-placed Reds play their game in hand against West Ham at Old Trafford.

“We wanted that final, but Chelsea scored three goals,” Matic told MUTV. “They used their chances and deserved to be in the final, so our focus is on Wednesday against West Ham.

“We have to win that game to be in the Champions League, so we will from this moment focus on that.

“We’ve already spoke a little bit in the changing room about that, so in three days we have another challenge and we have to recover as soon as possible.”

Sunday’s result means Matic’s former club Chelsea have an all-London FA Cup final with Arsenal to look forward to on August 1, although they too have pressing Premier League matters to deal with.

Third-placed Chelsea are just a point better off than Leicester and United ahead of Wednesday’s trip to champions Liverpool and Sunday’s Stamford Bridge clash with high-flying Wolves.

Blues boss Frank Lampard said: “We have finals ahead now. Arsenal is one for us, we know that, but before that we have two finals in the league this week.

“Recovery will be huge for us and we will refocus on the league now, but of course it will be a great occasion.

“It’s a London derby against a good side and a chance to win a trophy.”