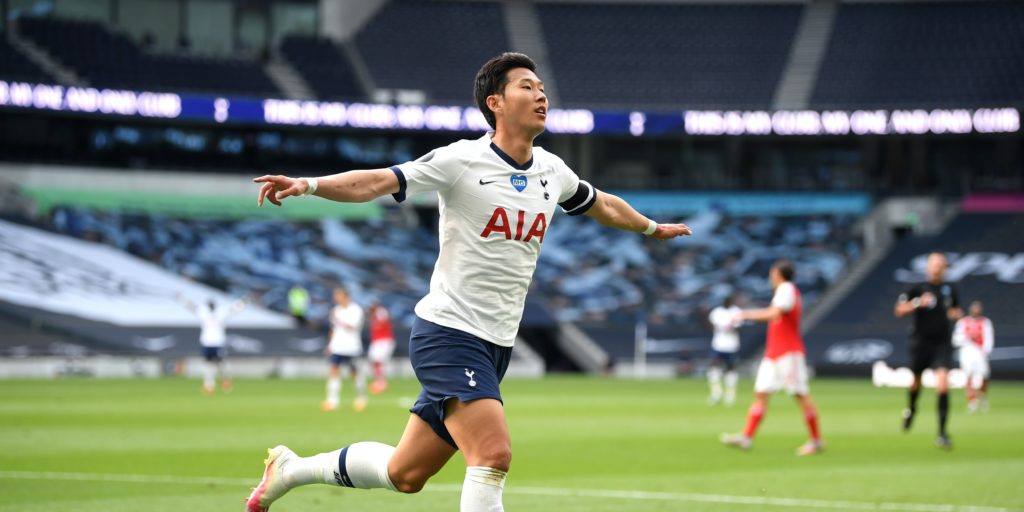 Spurs continued their fine form by blowing away Leicester on Sunday.

Son Heung-min is the latest person from the Tottenham camp to state their intention to win the Europa League next season if they get there.

Spurs took a huge step towards qualification for Europe’s second-tier event with a 3-0 win over Leicester on Sunday and they now look a good bet to finish the job with only one game left.

Boss Jose Mourinho has already been publicly vocal about wanting to have a crack at it next season and now Son has backed his manager up.

“It’s a long race. Europa League is longer than Champions League,” Son said. “If we play in it, of course we’ll try to win this tournament.

“But we can’t promise anything. We’ll do our best in every single game. We’ve got a chance, we’ll try to look forward and then we’ll see.

“We want to finish as strong as possible, we want to be in the Europa League. Now we’ve got one more game to go and it’s going to be really difficult again. We try to enjoy and fight for every game.”

Spurs have found some form as Mourinho’s methods are beginning to take hold and they have won four Premier League games in a row for the first time since January 2019.

In such a rich vein of form they will be one of the side’s who will be disappointed the season is coming to an end.

“This is how the season goes,” Son added. “The player work really hard over the whole year and it’s also important to re-set again.

“Sometimes we always want to play and of course we want to finish well. We have to accept (the season is ending) and try to finish strongly.”

Leicester had 24 shots on goal against Spurs but were vulnerable on the counter-attack, with all three goals they conceded coming by that method.

Mourinho said after the game that the Foxes struggled with playing a back five, but boss Brendan Rodgers disputed it.

“No, not at all. We’ve played it throughout the season,” he said.

“Of course, there’s more work needed on it, but it worked well against Sheffield United, and it’s worked well in other games. So no, I didn’t feel that was right.

“We played well in the game, we created opportunities. Our attitude in the game was good.

“We’re just disappointed with a few of the bits on the counter-attack. That might just have been the intensity of what we put into Thursday’s game. I felt we were a bit leggy for parts of that game.

“Attitude-wise the players gave everything. We’re missing players, but that’s going to happen.”