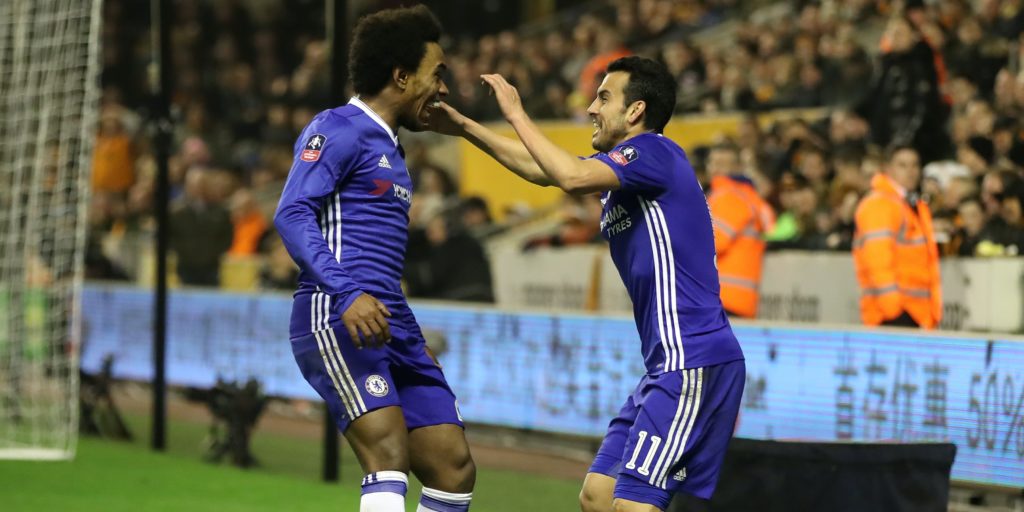 The pair signed short-term contract extensions in order to complete the delayed campaign.

Frank Lampard hopes to have Pedro and Willian available for both the FA Cup final and Chelsea’s Champions League clash with Bayern Munich.

The experienced duo are out of contract this summer, with Pedro expected to join Roma and Chelsea still talking to Willian about a possible new deal.

Chelsea will face Arsenal in the FA Cup final on August 1 before travelling to Munich for the second leg of their last 16 Champions League tie on August 8.

Chelsea trail Bayern 3-0 from their hefty first leg loss at Stamford Bridge in February, but Lampard is still intent on taking the strongest possible squad to Germany next month.

Asked if Pedro and Willian will be available for the FA Cup final and Champions League clash in Bayern, Lampard said: “You’ve caught me on the hop with that one a little bit.

“I have a presumption that they will do, I don’t want to say something that I get wrong, because I’m probably looking at Liverpool and Wolves ahead of anything else.

“But thanks for reminding me, I’ll make sure on that!

“We’ve obviously seen the value of not just Willian on the pitch in this restart, Pedro hasn’t played so much, but the value of their experience.

“So I clearly would hope they stay with us right until the end, I think that would be the thing that the club and players want.”

Chelsea will face Liverpool at Anfield on Wednesday, with Lampard confirming the Blues will give the new Premier League champions a guard of honour.

Lampard’s men will then close their league campaign by hosting Wolves on Sunday, with a third-place finish still theirs for the taking.

Admitting Champions League qualification was always the chief goal for the season, Lampard insisted the Blues are still streets behind Jurgen Klopp’s Reds.

“I completely respect their trophy lift but I don’t know (about watching it), that will depend on circumstances after the game. But we go there with huge respect.”

Asked how far Chelsea must go to be title contenders next term, the Chelsea boss continued: “Well a long way, a long way; and we have to be realistic about that as a club, as do many of the other clubs.

“Because themselves and Manchester City, particularly Liverpool in their league form this year, have shown an incredible consistency that only comes through hard work, and sometimes some time, with fantastic players and fantastic coaching.

“And we’re at a different point in the curve, and we have to look and respect that, and work towards it.

“But you’re talking about probably the two best club teams in world football, up there with maybe a couple of others in European football, but they are right up there.

“And that’s the difference, and the points don’t lie over the last few seasons.

“So we’re being realistic but we have to have strong targets and we want to close that gap.

“We have to say Champions League qualification was the number one goal at the start of the year; it’s a gauge of where you are as a club, and it’s the prestige of wanting to stay in the Champions League.

“We’ve done it a lot over the last 10 or 15 years at Chelsea, this year I think it probably was the most testing time to try and be in there, so if we do I’ll be happy.

“Does it mean we’ll be challenging for the league next year? No, it just means that we’ve made a really good step this year, if we get there. And then we have to say ‘okay how do we bridge that gap’, which still remains a lot of points.

“So hopefully it will be positive, we’re not there yet, and there will be much more work to do after that.”