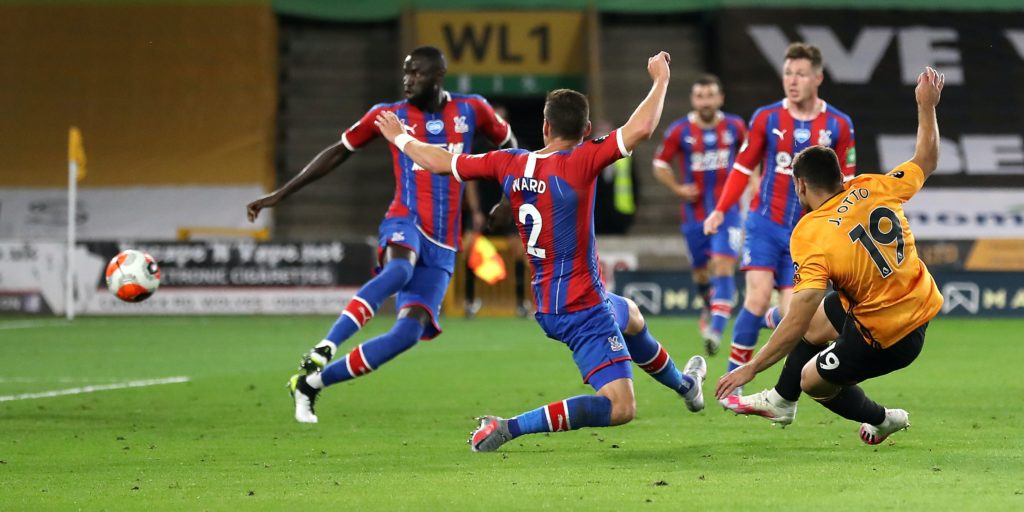 Wolves climbed back up to sixth after victory over Crystal Palace.

Daniel Podence and Jonny scored at Molineux as Wolves climbed back above Tottenham into sixth in the Premier League.

Victory at Chelsea on Sunday will confirm a return to the Europa League – a competition they remain in this term ahead of next month’s last-16 second leg against Olympiacos.

Wolves’ season will stretch to 366 days when they finish on Sunday having started the campaign last July with a Europa League qualifier at Crusaders.

They have surpassed last season’s points total by two and Nuno is delighted with their efforts during a long campaign.

He said: “Progress season-on-season is the idea. We are improving, building and looking for the next challenge. We embrace that.

“It pleases me a lot. The credit is all for the players. It has been a long season, one calendar year. I think surpassing last season’s points is a fair reward for us.

“The idea of improvement and the building process makes sense. We have achieved two more points than last season with one game to go. A lot of credit goes to the players in such a complicated season with all these issues and the pandemic. The belief of the players is incredible.

“It always feels good to win but it was two different halves. We played much better in the second. In the first half we should have moved the ball faster.

“Talent comes after the organisation, it’s much easier when you are solid in the game.”

Jeff Schlupp missed Palace’s best chance when he fired wide in the first half and Wolves went ahead four minutes before the break.

Palace’s confidence was shot and, after Vicente Guaita saved from Adama Traore, Jonny sealed the points when he turned and fired in following Raul Jimenez’s miscued shot.

Palace were ninth and harbouring European hopes a game into the restart but seven straight defeats ended those dreams.

One more will equal a club record and they host Tottenham on Sunday thankful they were clear of relegation danger before their wretched run.

“It was a bit of a groundhog day for us. We lose Mamadou Sakho (to injury after 23 minutes) and I thought in the first half the team played very well,” said boss Roy Hodgson, with the Eagles 14th.

“Conceding just before half time was a blow and in the second half we did the best we could do. We just have to keep picking ourselves off the floor.

“It’s pretty obvious we have to try to dust ourselves down and try to get freshened up because there are a lot of tired legs.

“Even with all of our best players available we would be looking at a match against Tottenham as a very difficult one to win.

“It’s going to be a tough one, we’ll do our level best to get a result but you don’t get it just by saying how important it is to get one.”