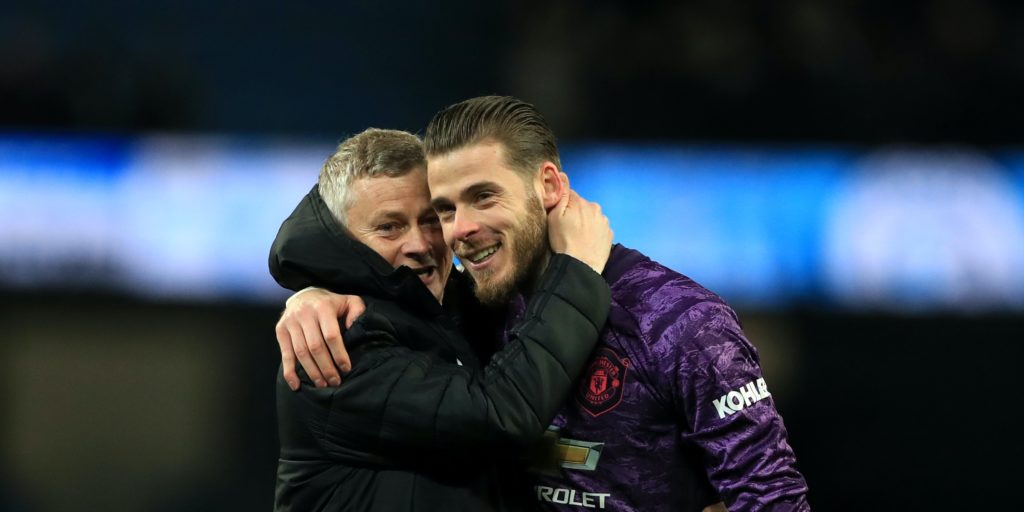 Ole Gunnar Solskjaer was not in the mood to talk about David De Gea as the Manchester United goalkeeper’s latest calamitous display dominated the build-up to a crucial Premier League clash with West Ham.

Just a month on from lauding the 29-year-old as the best in the world, the Red Devils manager’s goalkeeping dilemma increased after the Spain international cost his side a shot at FA Cup success on Sunday.

De Gea did not cover himself in glory for Olivier Giroud’s opener and was guilty of a shocker within a minute of the second half as a long-range Mason Mount strike somehow beat him, putting Chelsea in control of a semi-final they would win 3-1.

It was an alarming display that compounded some other glaring errors over the last 18 months, raising awkward questions about his status as number one ahead of Wednesday’s vital clash with West Ham.

“We’ve just got to stick together, stay strong,” Solskjaer said when asked how De Gea had mentally responded to Sunday.

“Now we’ve got two games to go and we’ve given ourselves a very good chance.”

Solskjaer’s attempt to focus on the collective rather than any individual was understandable but did not prevent follow-up questions on a goalkeeper tied down until at least 2023.

“This is not going to become a David De Gea press conference,” the United boss said. “We’re just going to stick together.

“We’ve got two games, so we’re just going to focus on that.

“David’s mentally strong enough to know that his job is to perform in training the next day and then be ready for the games.”

When put to Solskjaer that he may not want to talk about De Gea but that everybody else is, he retorted: “That’s your job to talk about and write about – and my job is to prepare the team for West Ham and that’s what we’re doing.

“We’re just focusing on that one. We’re not going to talk about individuals because no one here is going to feel like we put more pressure on them.”

Dean Henderson is snapping at De Gea’s heels having shone on loan at Sheffield United, while Sergio Romero, the back-up goalkeeper surprisingly omitted from the FA Cup semi-final starting line-up, is waiting in the wings.

Solskjaer has a significant decision to make about the position in their penultimate Premier League match of the season, given victory would give his fifth-placed side a huge boost in the Champions League chase.

Leicester’s 3-0 loss at Tottenham on Sunday meant United are not only level with the fourth-placed Foxes on 62 points but on goal difference as well, with the clubs going toe-to-toe at King Power Stadium in fascinating season finale on Sunday.

“Always you want to be a part of the biggest and best tournament, play the best teams,” said Solskjaer, whose side will jump into third above Chelsea, temporarily at least, with a positive result on Wednesday.

“That is an attraction in itself but then again Man United is attractive enough.

“I think everyone can see now that we’re on a journey towards something better. Well, I think so, anyway.

“It’s in our own hands. I don’t want to talk about how much it’ll mean financially or to attract people.

“We have just go to focus on these next two games and make sure we’re there.”

Solskjaer suggested Luke Shaw will be available to face West Ham after missing two matches with an ankle complaint, but Eric Bailly is expected to be unavailable after a nasty-looking clash of heads on Sunday saw the defender taken to hospital.

“I didn’t see him yesterday. He’s following the protocols that’s needed so, for me, I don’t think that he’ll be ready for this game. I’ve not seen him this morning yet.

“I think everyone’s available apart from that. No other injuries from last week.”