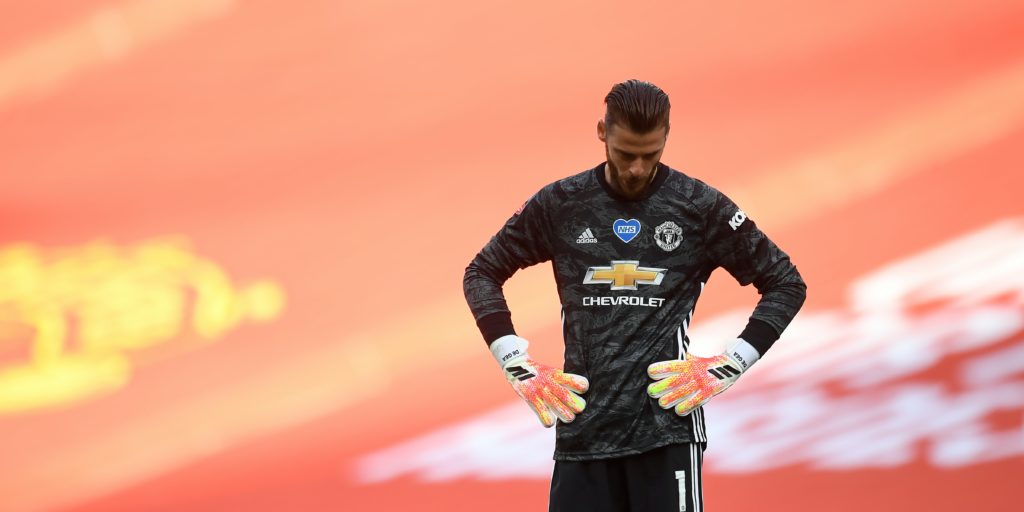 De Gea made costly mistakes in the FA Cup semi-final defeat to Chelsea.

Just a month on from lauding the 29-year-old as the best in the world, the Red Devils’ goalkeeping dilemma increased after the Spain international cost his side a shot at FA Cup success on Sunday.

De Gea did not cover himself in glory for Olivier Giroud’s opener and was guilty of a shocker as a long-range Mason Mount strike somehow beat him, putting Chelsea in control of a semi-final they would win 3-1.

It was an alarming display that compounded some other glaring errors over the last 18 months, raising awkward questions about his status as number one ahead of Wednesday’s vital clash with West Ham.

Solskjaer was in no mood to focus on the goalkeeper in the build-up and said “this is not going to become a David De Gea press conference”, but questions were natural about a player tied down until at least 2023.

Asked if he could clear up whether De Gea would start against the Hammers, the United boss said with a laugh: “No, because I don’t want to talk about him!

“We’ll stay together and you’ll see the team on Wednesday night.”

Dean Henderson is snapping at De Gea’s heels having shone on loan at Sheffield United, while Sergio Romero, the back-up goalkeeper surprisingly omitted from the FA Cup semi-final starting line-up, is waiting in the wings.

Selecting the Argentina international against West Ham would be a big call but Solskjaer has shown during his time in the Old Trafford hotseat that he is willing to make such decisions.

“Well, you have to (make big calls),” the United boss said.

“Every position is a big one here at this club so you’ve just got to do what is right for the team and the club.

Asked if Romero was disappointed to have been left out of the Chelsea match having started every other FA Cup match, Solskjaer said: “Everything we talk about is between ourselves.

“We keep that relationship open and every player can trust me to keep that confidential.”

Solskjaer suggested Luke Shaw is back in contention for Wednesday after missing the last two matches with an ankle issue, but Eric Bailly is set to miss out due to the head injury sustained at Wembley.

United made five changes to the side that has impressed in the Premier League this term, underlining concerns about the strength in depth at their disposal.

“There’s two games left now of the season and we’ve been playing non-stop since the restart,” Solskjaer said.

“We’ve enjoyed it. I think most of the players have had a chance, most of them have done well, so I’m very happy with the squad.

“It’s just that feeling of we’ve got great momentum when we’ve played and we didn’t get any injuries, so we’ve played more or less the same team and they performed really well.

“But as a club we’re always looking at promoting kids, adding players that are better than our squad anyway, so let’s just focus on these next two first.”

Fifth-placed United would take a big step towards a top-four finish if they beat West Ham in their penultimate match.

Leicester’s 3-0 loss at Tottenham means Solskjaer’s side are level with the fourth-placed Foxes, both on 62 points and a goal difference of 28, with the clubs going toe-to-toe at the King Power Stadium in Sunday’s fascinating season finale.

“We’ve given ourselves a great chance and it is, as you say, squeaky bum time,” Solskjaer said. “I’m looking forward to it and I’m pretty sure the players are as well.”