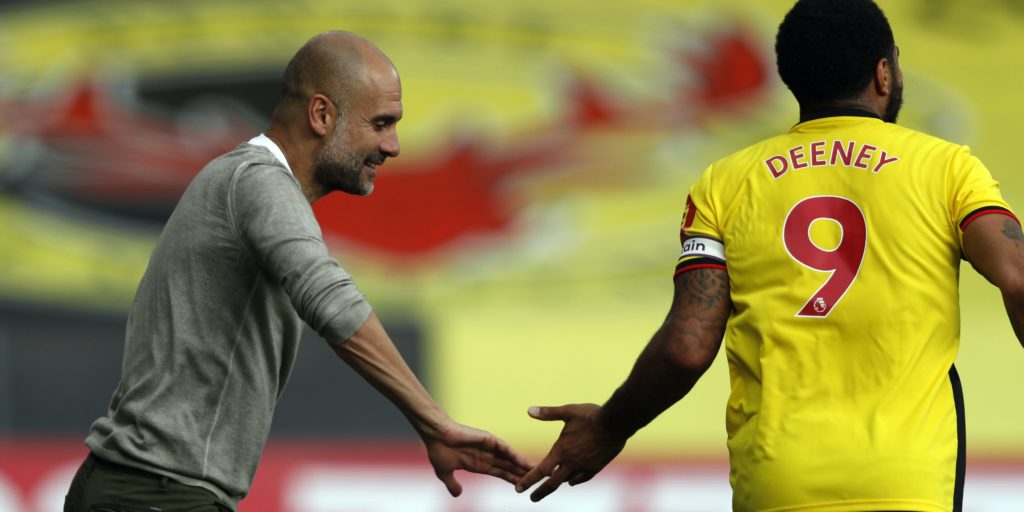 The deposed champions have won four Premier League games for the first time this season.

Pep Guardiola was pleased to see Manchester City take a step towards their best form with a 4-0 win over Watford ahead of next month’s Champions League tie with Real Madrid.

A first-half brace from Raheem Sterling and goals after the break by Phil Foden and Aymeric Laporte helped them return to winning ways after losing to Arsenal on Saturday in the FA Cup semi-finals.

The City boss highlighted City’s lack of consistency this season after the victory on the road and also admitted places are up for grabs ahead of their last-16 second leg meeting with Madrid at the Etihad.

Benjamin Mendy will be suspended for the clash with Madrid after he picked up a caution in the 2-1 win over the Spanish giants in February.

Joao Cancelo and Oleksandr Zinchenko are battling to start at left-back and Guardiola talked up the recent development of the former after his summer switch from Juventus.

“He understands us better than the beginning and we understand him better,” the Man City manager said of Cancelo.

“I know exactly what Oleks can do. I know him very well and I want to know how Joao (can) move in this area.

“Now we are going to have another game (against Norwich) and after we have two weeks and I will see. I will look at the training session and smell how the players’ commitment is and how they are able to play this game.”

Sterling’s double at Vicarage Road took him to 29 goals for the season, which is his best ever tally.

While pleased for the former Liverpool attacker, Guardiola knows the team improving their consistency is key if they are to better Jurgen Klopp’s champions in the next campaign.

“I love when the player can achieve their desires and score goals,” he added.

“I am happy for this commitment to score a goal but Raheem has to know, like all of us have to know, we were far away from Liverpool.

“It is the first time (this season) we are able to win four games in a row in the Premier League.

“That means how poor our consistency was this season because we are the same people. It happened because something was wrong and it is something we’ll work on next season.”