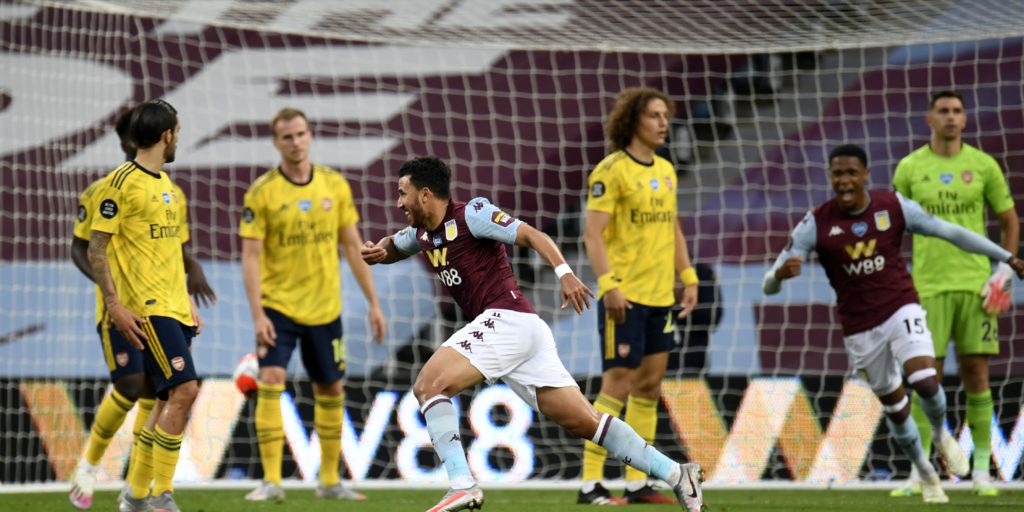 Dean Smith’s team go into the final Premier League game of the season out of the bottom three.

Aston Villa grabbed a priceless Premier League survival lifeline, beating Arsenal to climb out of the drop zone with one match to play.

Trezeguet netted a crucial winner to clinch a 1-0 victory which lifts Villa out of the relegation zone for the first time since February.

The winger set up a dramatic finale on Sunday with Villa, Watford and Bournemouth locked in a three-way battle against the drop.

Dean Smith’s side are now above of the bottom three on goal difference ahead of Sunday’s trip to West Ham, who are out of danger thanks to their own superior goal difference.

For Arsenal, they will need to rely on an FA Cup win next month to return to Europe and could finish as low as 10th in the Premier League.

The Gunners hit the post through Eddie Nketiah but never found the form which saw them beat Liverpool and Manchester City in their previous games.

Dion Dublin scored twice the last time Villa beat Arsenal at home in 1998, with the team including England boss Gareth Southgate and an 18-year-old Gareth Barry.

Steps’ cover of Tragedy was number one in the charts – but if Villa escape relegation on the final day there will be a happy ending.

Back then Arsenal were champions but the title feels a long way away for the Gunners despite the promising early signs of Mikel Arteta’s debut season.

A plane towing the message ‘Back Arteta Kroenke Out’ served as a reminder of the anger felt by fans with the Gunners facing a fourth season outside the Champions League, having not won the title in 16 years.

The noise of the aircraft almost drowned out the players in an empty stadium which did little to spark the game in a low tempo opening 20 minutes.

But out of the blue the the hosts made the decisive breakthrough in style after 27 minutes.

Conor Hourihane’s corner missed everyone except for Trezeguet who was loitering at the far post and the winger drilled in a brilliant low strike from 15 yards.

Dani Ceballos fired wildly over as Arsenal tried to find an instant response but the Gunners, now having equalled a club record for fewest away wins in a season, were too passive.

Pierre-Emerick Aubameyang and Alexandre Lacazette were given nothing and Arsenal were too passive to seriously threaten a recovery.

Jack Grealish whistled a 20-yard drive wide just before the break and Arteta replaced Lucas Torreira with Granit Xhaka for the second half.

There was a flicker of urgency from Arsenal from the restart and Bukayo Saka ballooned over a Cedric cross.

Ezri Konsa blocked from Aubameyang before Nicolas Pepe and Kieran Tierney climbed off the bench.

Villa kept the Gunners at bay though and should have made it comfortable with 15 minutes left.

Emiliano Martinez beat away John McGinn’s fierce drive at the other end as Villa nerves began to grow – but they held on.