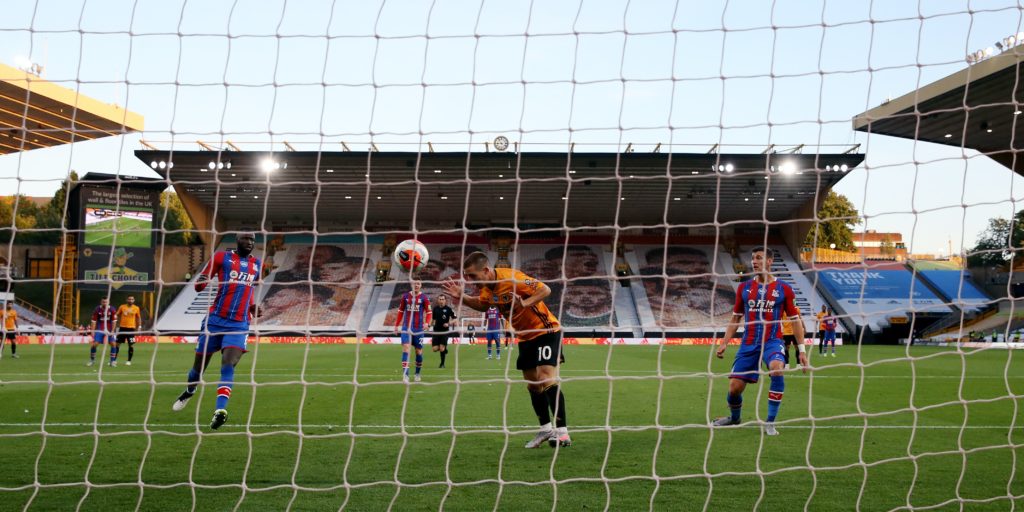 Wolves took control of their European destiny and added to Crystal Palace’s misery with a routine 2-0 win at Molineux.

Daniel Podence’s first goal for the club and Jonny’s low strike clinched victory ahead of the Premier League’s delayed finale on Sunday.

Nuno Espirito Santo’s side remain in this year’s competition and host Olympiacos on August 6 having drawn 1-1 in Greece in March, with the victors facing a one-off quarter-final against Roma or Sevilla in Germany next month.

But aside from a moment of magic from Joao Moutinho which helped set up Podence, Wolves failed to reach their fluid best against Palace.

The Eagles, with Jeff Schlupp missing their best chance, wilted after going behind and Roy Hodgson’s side slipped to a seventh straight defeat.

They will equal a club-record losing streak if they are beaten at home by Tottenham on Sunday, with Spurs ready to threaten Wolves’ grip on sixth.

It is debatable how much of a part luck and technology played in Palace’s wretched run of losses, which includes just two goals.

They had felt aggrieved after their 2-0 reverse against Manchester United, being denied a penalty and then seeing a Jordan Ayew goal ruled out by VAR.

But defeat by Burnley and capitulations at Leicester and Aston Villa have left them close to an unwanted piece of club history, having been ninth in the table a game into the restart.

On Monday there was at least a steely resolve from the visitors, now 14th, to remain firm against their hosts, even after losing Mamadou Sakho to injury after 23 minutes.

It helped that sluggish and sloppy Wolves were not at the races and the Eagles wasted a fine opening after 27 minutes.

Wilfried Zaha’s quick feet found Schlupp but the wide-man dragged his shot an inch wide, serving as a reminder why Palace have only scored 30 league goals this term.

The best Wolves could muster was Podence’s ambitious overhead kick while Andros Townsend’s free-kick was gathered by Rui Patricio at the other end.

But Palace were the architects of their own downfall four minutes before the break.

Wolves had been second best but Townsend’s loose pass failed to find Zaha and Moutinho punished them.

His delicate chip left Palace floundering and Matt Doherty raced onto the pass to cross for Podence, who nodded in from close range.

The goal hit the Eagles’ fragile confidence and, as Wolves slowly improved, they began to create chances.

Raul Jimenez’s shot deflected over and Adama Traore linked with Podence 14 minutes after the beak but was denied by Vicente Guaita.

Traore was becoming more of a threat and he contributed to Wolves’ second goal which wrapped up the game after 68 minutes.

The winger bulldozed his way past James McArthur and Tyrick Mitchell and, when Jimenez’s miscued shot fell to Jonny, the wing-back turned and fired in low from 12 yards.