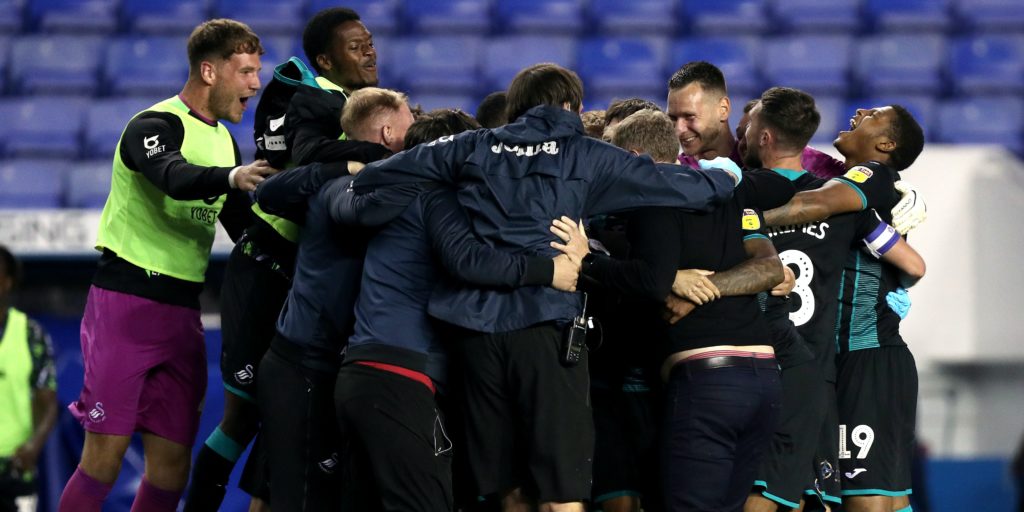 A 4-1 win at Reading saw them edge out Nottingham Forest on goal difference.

Swansea head coach Steve Cooper promised that his players had “come back down to earth already” after their stunning 4-1 win at 10-man Reading had clinched a place in the Sky Bet Championship play-offs.

The South Wales club edged out Nottingham Forest by a mere plus-one on goal difference and now face a two-legged semi-final against Brentford.
Swansea went ahead through a long-range effort from Rhian Brewster in the 17th minute.

Reading had winger Yakou Meite sent off for violent conduct before half time but George Puscas levelled from a penalty.

Swansea regained the lead through Wayne Routledge in the second period and late goals from Liam Cullen and Routledge secured their top-six spot.

“It was all a bit of a blur at the end,” Cooper said. “But we got over the line.

“We’re calm now and refocused. It’s a pat on the back at the moment but still not a time for congratulations.

“We’re there already, back down to earth. We’ve still got two or maybe three games to go.

“What an eventful night it was. We’ve got the job done in the end, we achieved our objective, but no one thought that it was going to be in that way.

“It was, though, going to take something extraordinary for it to happen. And it has done.

“We started OK. We were decent with the ball. But we needed to pick it up a bit in the second half.

“And the four goals that we scored, that’s our way of playing.

“Once we knew that we needed some more goals, with the way the Forest game was going, we didn’t panic.

“We didn’t just knock balls in the box. We waited for the right moment.”

Mid-table Reading have now won only one of their last 14 home matches in all competitions.

“In the first five or 10 minutes, we were a bit slow to get to grips with the Swansea passing game,” Reading manager Mark Bowen said.

“Then we came into it and I thought that we were playing some decent stuff, with some good possession.

“We got a foothold in the game and then the first shot that they had flies in the back of the net.

“Then Yakou [Meite] loses his head. Their fella [Mike van der Hoorn] went down as if he’d been shot but he’s entitled to do that if someone raises their hands to him.

“Down to 10 men but we showed a bit of character to get back into the game.

“But from then on in, we had to make sure that we were defensively sound and could still play counter-attacking football.

“We did that OK to a degree but then we came to the back end of the game and maybe a bit of tiredness crept in.”