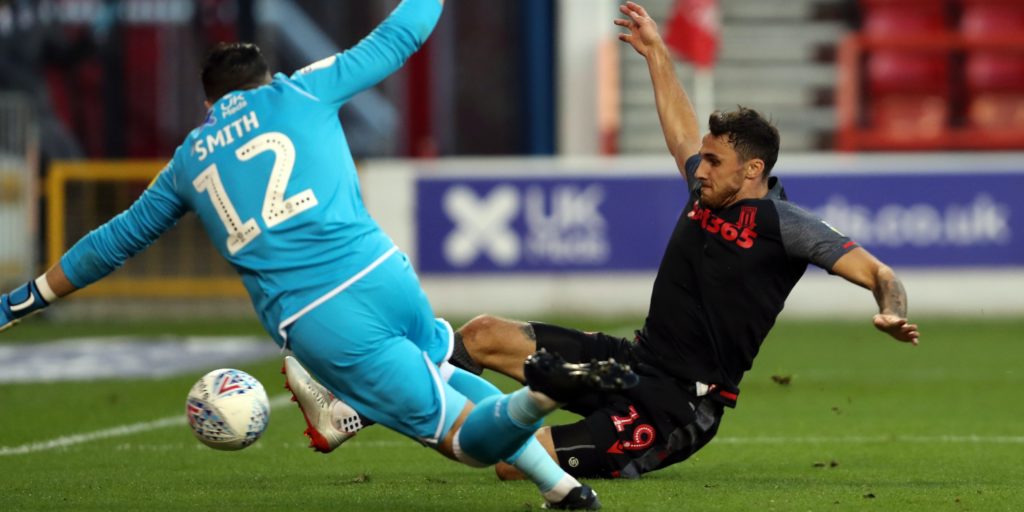 A 4-1 home loss was agony for Sabri Lamouchi’s team.

A 4-1 home defeat to Stoke saw Nottingham Forest miss out on the play-offs by one goal on an evening of high drama in the Sky Bet Championship.

Sabri Lamouchi’s team went into the final round of fixtures firmly in the driving seat as his side, Cardiff and Swansea all tried to cement a top-six finish.

The Reds, without a play-off campaign since 2010/11, could even afford to lose as long as there was not a dramatic swing with Swansea. However, that is exactly what happened.

Danny Batth put Stoke in front after 19 minutes but Forest equalised through Tobias Figueiredo just after the hour.

Goals from James McClean, Lee Gregory and an own goal by Joia Nuno Da Costa saw Forest slump to a 4-1 defeat while Swansea won by the same scoreline at Reading and leapfrogged Lamouchi’s team in dramatic fashion.

It will be a huge disappointment for Forest but Stoke finish the season with 56 points – a point more than they won last season – and that is some achievement considering the Potters had eight from 15 games when Michael O’Neill was appointed as manager in November.

Stoke had to make a late change to their team after Nick Powell was injured in the warm-up, with Tashan Oakley-Boothe coming into the starting line-up for his first action since March.

Whether it disrupted the visitors is hard to say but Forest started well and only a fine reflex save from Adam Davies denied Sammy Ameobi an early opening goal. Ryan Yates was unable to turn in the rebound.

Jordan Thompson then made a last-ditch block right in front of the goal line as Lewis Grabban, with Davies beaten, looked certain to score.

It was against the run of play when Stoke went in front and Oakley-Boothe was involved. His quick thinking saw a corner taken short and Thompson swung in a cross for Batth to plant a header into the net from close range.

Forest spurned a glorious opportunity to equalise just before the half hour. Joe Lolley timed his run to beat the offside trap and was one-on-one with Davies but tried to tee-up Grabban rather than shoot himself and Bruno Martins Indi was able to make a challenge and hook the ball away.

Tiago Silva and Lolley went close with long-range efforts for Forest just before half-time, while Lee Gregory did likewise for Stoke at the start of the second half.

Another crucial challenge, this time by Batth, denied Grabban when he tried to turn in Silva’s cross.

However, Forest would not be denied much longer and they equalised just after the hour. Lolley’s delivery from the corner was exemplary, bent with pace and purpose towards the far post, and Figueiredo headed the ball over the line from inside the six-yard box.

Stoke went back in front after 73 minutes. McClean was judged to be onside when he tapped home the ball at the far post after Josh Tymon’s shot was parried by the goalkeeper.

Five minutes later, it was 3-1. The goal was almost a carbon copy of Tymon’s but this time it was his low cross that was turned it by Gregory.

At around the same time, Swansea scored to lead 3-1 at Reading. Forest’s play-off hopes were now on a knife-edge. Another goal for the Swans or a fourth for Stoke would see the Reds miss out.

Forest’s hearts were in their mouths when Tymon broke clear and his deflected shot went narrowly over the crossbar.

At the Madejski, however, Swansea had scored and news had clearly reached the Forest bench. Forest had to score but as they pushed for the goal they were caught on the break and Nuno Da Costa turned the ball into his own net to seal their fate.