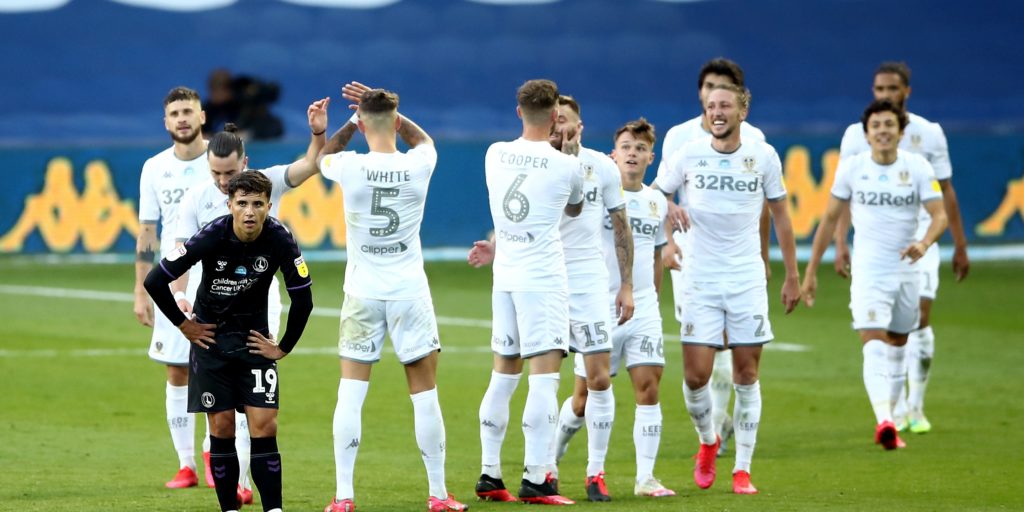 Champions wrap up campaign with a 12th win in 14 matches.

Leeds produced a display befitting of champions on the final day as a 4-0 win consigned Charlton to relegation.

The Sky Bet Championship title winners led 2-0 at half-time through Ben White’s superb volley and Stuart Dallas before substitutes Tyler Roberts and Jamie Shackleton were on target in the second period.

Leeds, who had sealed promotion and then the title before Sunday’s win at Derby, finished the season on 93 points after winning 12 of their last 14 matches.

They began their promotion party on Friday after West Brom’s defeat at Huddersfield, but showed no hangover at Derby and refused to take their foot off the pedal against former midfielder Lee Bowyer’s Charlton.

From the first whistle Leeds showed the same hunger as they did in August and there was an air of inevitability about their opening goal in the 13th minute.

Pablo Hernandez’s corner was only half cleared and White crashed a right-footed volley into the top corner from the edge of the area having nonchalently cushioned the ball on his chest.

Ezgjan Alioski blasted over from inside the area as Leeds laid siege on Charlton’s 18-yard box and visiting goalkeeper Dillon Phillips turned away Hernandez’s angled drive.

Leeds’ second was another beautifully-worked goal in the 28th minute when Dallas applied a neat finish after Hernandez had audaciously played him in through a defender’s legs.

Luke Ayling’s sweetly-struck drive forced another flying save from Phillips, who then denied Dallas.

The visitors battled gamely, but were left to rue a costly miss just before half-time when Alfie Doughty fired off target after being sent clear by Aiden McGeady.

But there appeared no way back for the Londoners when Leeds struck again in the 51st minute, Roberts rising unmarked to head home Hernandez’s corner.

Leeds added their fourth goal with 24 minutes left. Ian Poveda scampered clear and slipped the ball inside for fellow substitute Shackleton to convert into the bottom corner.

Leeds boss Marcelo Bielsa sent on young midfield pair Mateusz Bogusz, for his league debut, and Jordan Stevens in place of Hernandez and Harrison and the home side continued to dominate.

Meslier denied Charlton again when they threatened through Aneke’s late header and several of their players sat crestfallen on the pitch after the final whistle in what was a rotten return to Elland Road for Bowyer.