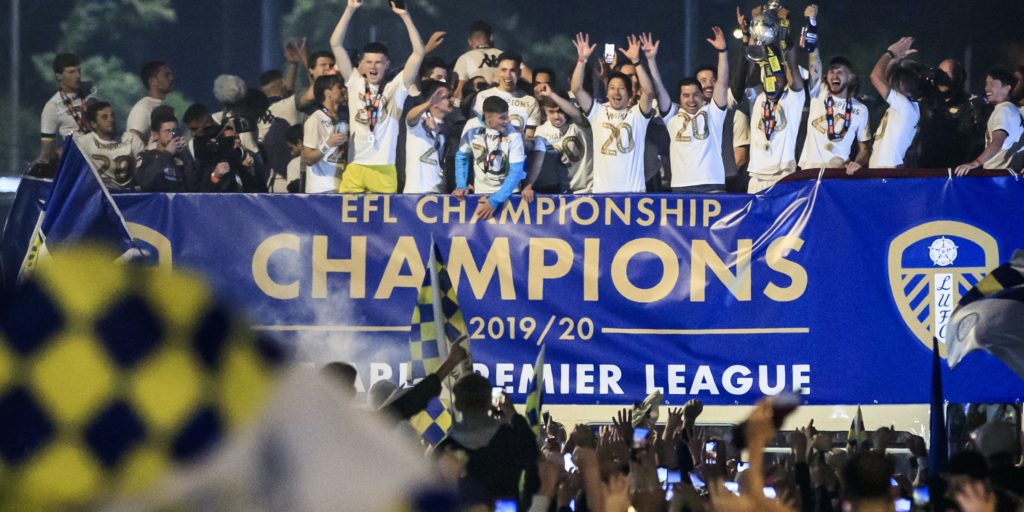 Thousands of supporters gathered outside Elland Road despite the club’s concerns about the coronavirus pandemic.

Leeds have defended their decision to parade their players in an open-top bus at Elland Road after their Sky Bet Championship title trophy presentation.

Leeds had already sealed promotion back to the Premier League as champions and a 4-0 home win against Charlton in their final match sparked more celebrations outside the stadium.

“Following consultation with the SAG (Safety Advisory Group) and (Leeds City) Council, Leeds United arranged for a bus to be parked outside the East Stand reception as a contingency to assist dispersal should a crowd congregate at Elland Road, despite a month-long campaign from the club and supporter groups to encourage supporters to stay at home,” said a club spokesman.

“The safety group believed that a brief appearance from the players with the Championship trophy would help to signal an end to proceedings, encouraging fans to head home safely.

“In challenging circumstances fan safety has always been our priority.”

Both Leeds owner Andrea Radrizzani and managing director Angus Kinnear had appealed before the game for Leeds fans to help in the fight against coronavirus by staying at home.

But thousands of supporters gathered outside Elland Road and the players boarded the bus to join in the celebrations after their pitchside trophy presentation had concluded.

Leeds manager Marcelo Bielsa was also on the bus, but he declined to speak to the fans and did not turn up for his post-match press conference.

It was a miserable return to Elland Road for Charlton boss Lee Bowyer, who spent seven years at Leeds as a player.

Bowyer cast doubts over his future with the south-east London club following their return to the third tier after just one season.

“We’ll have to see what happens in the summer,” Bowyer said. “There’s a hell of a lot of things that I’ve not been happy with.

“More things recently have happened which have made me even more unhappy. But I love the club and, like I said, I’ve been loyal and I gave my all.”

Bowyer, who has been linked with the vacancy at another of his former clubs, Birmingham, said: “I don’t think it’s the right time to talk about whether other clubs will be interested in myself.

“I’ve been loyal, I know that. I’ve definitely been loyal. I could have left on more than one occasion and I’m glad I stayed.”

The Addicks failed to win any of their last seven matches and although survival was still in their hands on the last day, Bowyer said the damage had already been done.

“I’m not happy. We’re relegated and I’ve just said to the players it’s not because of tonight’s game,” Bowyer said.

“We should have been safe before we even came here tonight, but we weren’t and I’m disappointed obviously.

“Getting relegated. It’s never a nice thing to happen. I’m not in a good place at the moment.”