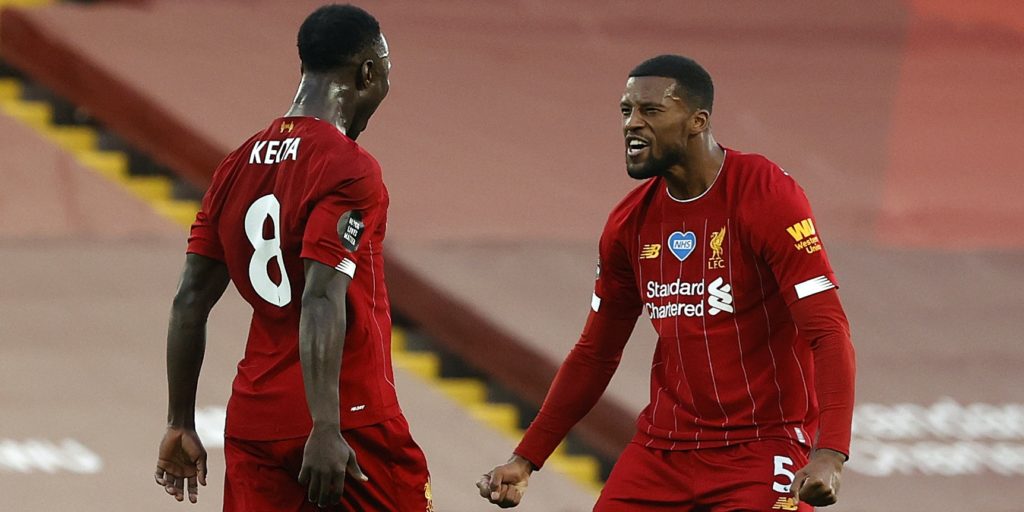 Frank Lampard’s side are sweating on Champions League qualification.

Liverpool were in no mood to allow Chelsea to spoil their Premier League trophy presentation party with an entertaining 5-3 win entirely befitting the occasion.

While that ensured the hosts celebrations were not dampened, having waited 30 years to lift the top-flight title, it left Frank Lampard’s side sweating on Champions League qualification.

They host Europa League-chasing Wolves on Sunday needing a point to guarantee a top four spot but will need to defend much better than they did at Anfield.

Chelsea’s recruitment for next season so far has focused on the final third with Ajax winger Hakim Ziyech and RB Leipzig striker Timo Werner acquired at a cost of around GBP 80million.

However, seeing Naby Keita, Trent Alexander-Arnold and Georginio Wijnaldum all score in 21 first-half minutes suggested reinforcements are required at the other end of the pitch.

The attacking options Lampard currently has did a decent job of getting them back into the game with veteran striker Olivier Giroud’s eighth goal in 16 appearances against the Reds just before the break giving them hope and substitutes Tammy Abraham and Christian Pulisic making a real game of it after Roberto Firmino’s first Anfield league goal of the season had made it 4-1.

There was a short period where Liverpool, amid a cacophony of pyrotechnics going off outside the ground, looked far from comfortable until Alex Oxlade-Chamberlain scored their fifth late on to make it 59 home league matches unbeaten.

That allowed the party, if it could be called such in an empty stadium, to get started with injured captain Jordan Henderson adding a Premier League to his already-impressive CV of Champions League, European Super Cup and Club World Cup trophy lifts on a specially-erected platform on the Kop.

Manchester United’s draw with West Ham earlier in the evening had made the equation easier for Chelsea but their early play suggested they were not content to play for a draw with the unmarked Mason Mount heading over and Reece James firing a shot wide.

Very few teams in the last three years have had the luxury of being able to spurn chances at Anfield and get away with it and a familiar story subsequently played out.

Liverpool struck twice in fine fashion to knock all the early promise out of the visitors.

Willian was dispossessed by the press of Keita and Wijnaldum and the former blasted a shot into the top corner for his first Anfield league goal since April 2019.

Keita was putting in one of those dazzling performances seen so infrequently since his arrival two years ago, with one earlier turn on the experienced Cesar Azpilicueta leaving the Chelsea captain chasing thin air.

The air was considerably more heated in the technical area with Klopp and Lampard exchanging words after Mateo Kovacic launched into Sadio Mane from behind to halt the Senegal international’s brilliant run from the halfway line.

Lampard’s mood darkened further when Alexander-Arnold whipped a signature free-kick around the wall and past Kepa Arrizabalaga and while the Liverpool players were appealing for handball against Jorginho, Wijnaldum pounced to volley home the third.

Lampard was finally given something to smile about in added time when Giroud forced the ball home after Alisson Becker could only parry Willian’s close-range shot into the air.

Salah had a chance early in the second half but opted to go with his stronger left foot rather than the right for which he was better placed from Roberto Firmino’s flick and skewed it horribly wide.

But the fourth goal was not long in coming with Firmino heading in Alexander-Arnold’s teasing cross, his 25th assist in the last two seasons.

Lampard’s made a triple substitution and two had an immediate impact as Pulisic’s low cross was side-footed home by Tammy Abraham, with Pulisic then roofing a shot to make it 4-3 as the party started early outside with fireworks going off behind the Kop.

But it was a Liverpool substitute Oxlade-Chamberlain who delivered the decisive blow by converting Robertson’s low cross first time six minutes from the end.