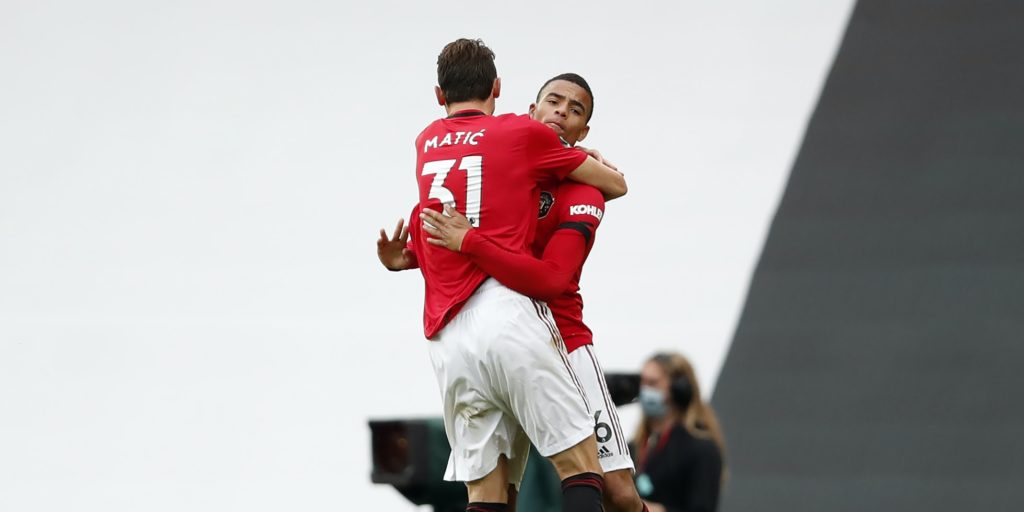 United need a point at Leicester in the final game of the season.

Ole Gunnar Solskjaer is delighted to be heading into Sunday with a “fantastic opportunity” to qualify for the Champions League after Manchester United stumbled back into the top four against West Ham.

While well short of some of the displays they have put in after the coronavirus suspension, teenage star Mason Greenwood saw United come from behind to draw at an empty Old Trafford.

Paul Pogba’s embarrassing handball allowed Michail Antonio to give David Moyes’ West Ham a surprise half-time lead, but the 18-year-old’s latest strike secured a 1-1 draw that could pivotal in the final shake-up.

The point moved Solskjaer’s side into the top-four for the first time since mid-September. Furthermore, it means avoiding defeat at Leicester, who dropped to fifth, on the final day on Sunday will see United qualify for the Champions League.

“Well, going into half-time we knew that’s not the result we wanted and a draw or a 1-0 win or a 2-0 win was more or less the same outcome for us,” Solskjaer said.

“Then we have the same starting point on Sunday.

“You can’t expect to go and turn teams over and score three or five like we did to have a different scenario for Sunday.

“But we’ve given ourselves a fantastic opportunity and a great starting point for Sunday.”

Greenwood was the key man on Wednesday evening, taking his tally to 17 in all competitions to go level with George Best, Brian Kidd and Wayne Rooney in terms of single season goal tallies for teenage United players.

“He’s bailed us out a few times and he’s done it again,” Solskjaer said.

“He’s been absolutely top class ever since we gave him an opportunity.

“I think Cardiff in the last game of last season was his first start and he was our best player in that game and he’s grown and grown in confidence and belief.

“He trusts himself that his talent, his qualities, attributes, they actually work at the highest level.”

Greenwood’s goal saved Pogba’s blushes in particular. The midfielder put his hands in front of his face when blocking a Declan Rice fizzer and saw Antonio put away the penalty awarded by the video assistant referee.

“It’s a natural reaction,” Solskjaer said. “Paul’s held his hand up in knowing that he should have took it in the mush instead.

“But it’s a natural reaction if that ball comes flying at you at 100mph. It wouldn’t have made a difference anyway.”

While Solskjaer’s side have a lot riding on the final day, former United manager David Moyes can rest easy.

Already boasting a superior goal difference, the point means that West Ham are guaranteed of another season in the Premier League.

“Before today’s game, I think it would have taken a pretty big total for other teams to catch the goal difference and get the points,” Moyes said.

“But the maths didn’t make it safe and thankfully today the players put in a great job, played really well.

“I think we thoroughly deserved a point today.”

Moyes was allowed to leave after leading West Ham to safety during his previous spell at the east London club, but the Scot has a year left on his deal and is optimistic about next season.

“I actually think we were moving in the right direction already,” he said.

“I think we have got some young players, I think we’ve got some good talent, who I believe will improve and get better.

“Hopefully given a little bit of time, we’ll be able to do that.”