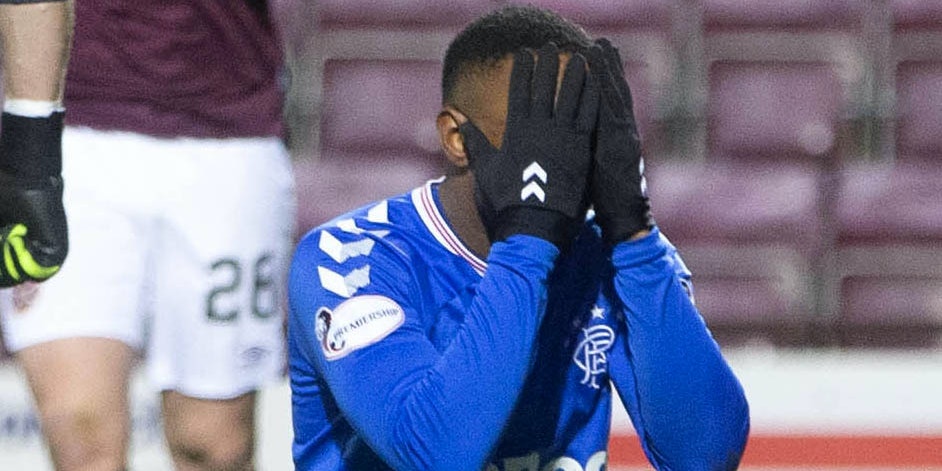 Steven Gerrard admits he may have to step up his hunt for a new striker after a late injury to Jermain Defoe marred Rangers’ 4-0 win over Motherwell.

The Light Blues were in sparkling form as they returned to Ibrox for the first time since March.

Ryan Kent, Ianis Hagi and Joe Aribo all struck before the break before the rejuvenated Brandon Barker forced Ricki Lamie into an own goal midway through the second half.

But the smile was wiped off Gerrard’s face when veteran hitman Defoe limped off with a hamstring injury.

The Ibrox boss has already stated he wants to bring in another forward to compete with the 37-year-old and Alfredo Morelos for a starting slot and has been linked with moves for Anderlecht’s Kemar Roofe, Lyndon Dykes of Livingston and Hibernian’s Florian Kamberi, who spent last season on loan with Gers.

Now the pace of that hunt is set to be stepped up.

“The only disappointment from tonight is Jermain’s injury,” Gerrard told Premier Sports. “We don’t know the extent of it yet. We know it’s a hamstring but until we scan it, we won’t know how long it will be.

“First and foremost we just need to stay calm and find out the extent of the injury.

“I went on record last week to say I’d like to add in that area in terms of having extra fire power so who knows? It might push us even further in that direction to try and get something done.”

Gerrard was still overjoyed with his side’s display against Well as they continue to impress in the build up to the new campaign following last week’s double win in France.

“That’s the level we’re looking for,” he said. “I’m really pleased with our intensity from the start certainly to half-time.

“I still think we can get better in that final third. We got into some real good areas around the box and just need to be a little bit more patient and show a bit more quality. If we do then I think we can create even more.

“We certainly look a real big threat on the transition. As soon as Motherwell made a mistake we pounced on them, opened them up and scored some really strong goals.”

Motherwell boss Stephen Robinson said: “It was a tough game. Rangers look fitter and sharper having played quality teams like Lyon and Nice.

“We have a game against Celtic this weekend plus hopefully another against Rangers in a bounce game because that’s the level of opposition we want to play against.

“You learn a lot more about the fitness levels and the quality of decisions when you’re tired. We’re trying to test ourselves and I think we’ll benefit much more with games like this.”