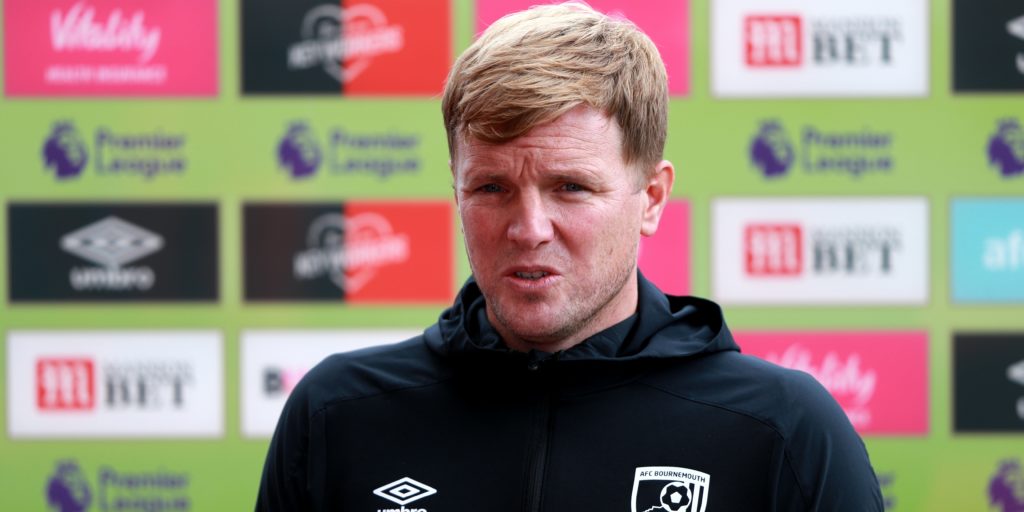 Eddie Howe has told his Bournemouth players to “enjoy” their last roll of the Premier League dice at Everton on Sunday.

Bournemouth must beat the Toffees and hope both Watford lose at Arsenal and Aston Villa lose at West Ham to claw their way to top-flight survival.

Manager Howe has admitted attempting to have fun amid such a pressure situation will not be easy – but will be vital to Bournemouth’s chances of pulling off a classic last-day escape.

“I don’t think the players will need help getting motivated for this game,” said Howe.

“Thinking too much, or getting too emotional, can be very counter productive so we need the players just to – it sounds funny, but – enjoy the game, play the game as they have always done. But play to a very high level, that’s what we’ll be trying to do.”

Asked if he and his coaching staff can enjoy the day too, Howe replied: “Yeah, enjoying it? We try to. It’s a very, very difficult feeling.

“But I think we’ll go and we have to, you have to stick to your instincts and your principles, and everything that you’ve always done.

“Because I think you can’t let one game change you emotionally.

“So I think we’ll go and attack the game, try and win, and then see what happens.

“We’re going to have to be good mentally, put all the other noise aside and focus on the football match.”

This decisive relegation battle will be played out behind closed doors, so none of the grounds will have the usual crowds filtering through scores from elsewhere.

No pockets of fan celebrations as goals fly in elsewhere will leave Goodison Park even more eerie than the usual supporter-free project restart matches.

Howe will do his best to avoid any updates on the other matches, and that process could be easier than normal.

“Me personally, I’ll be engaged in the game, I’m always the same,” said Howe. “I’m so focused on our game that there will be no thought of any other.

“It doesn’t matter to us really what happens elsewhere, we have to win this game to have any chance. So I’ll put all my energies into that.

“I’m sure at some stage I will hear what’s happening elsewhere. But we have to win regardless, so that’s what I’ll be working on.”

Charting the emotional toll of a relegation dogfight, Howe continued: “In football you get so many blows, so many disappointments, picking yourself up becomes almost a ritual you have to go through.

“It’s a process. You lick your wounds for the night of the game, the next day, you have to clear your emotions and rebuild. It’s a process this season we’ve unfortunately had to do too many times.

“So that’s something you have to be very, very strong at.

“You need to be resolute and positive, because you need to affect the next moment in your career, not the things that have gone.”