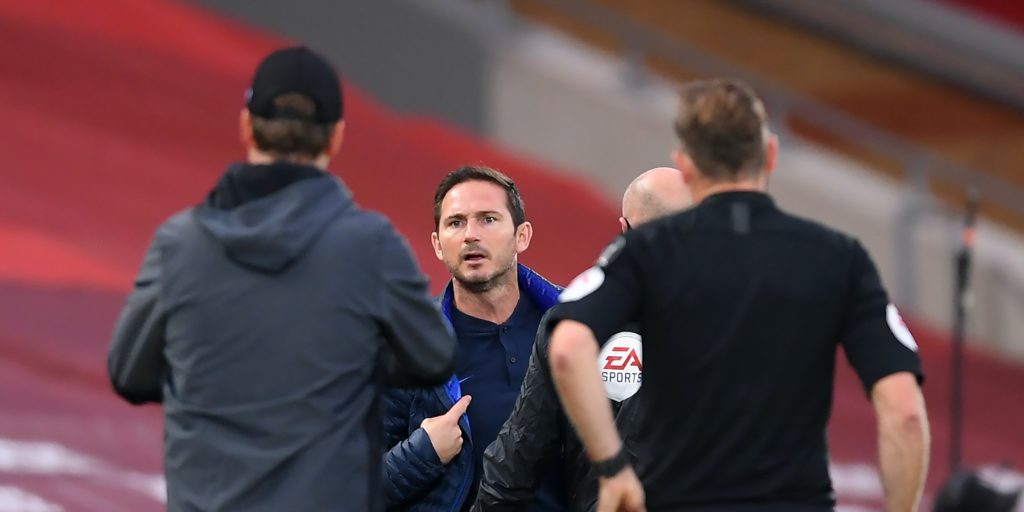 Klopp was unhappy the former England midfielder chose to air his grievances after the match..

Liverpool manager Jurgen Klopp has hit back at Chelsea counterpart Frank Lampard’s “arrogant” jibe by suggesting the rookie boss still has a lot to learn.

During Wednesday’s 5-3 defeat to the new Premier League champions, Lampard became embroiled in a row with Klopp’s assistant Pepijn Lijnders over a foul given against Mateo Kovavic for a tackle on Sadio Mane which led to the free-kick from which Trent Alexander-Arnold scored to make it 2-0.

Speaking after the game, Lampard said: “Fair play to Liverpool Football Club, they’ve won the league, but also don’t get too arrogant with it.”

Klopp was unhappy the former England midfielder chose to air his grievances after the match.

“You cannot hit me and my bench with something like that because we are not arrogant,” he said.

“Frank was obviously in a really competitive mood and I respect that a lot. From my point of view in this sort of situation you can say pretty much what you want. For me, after the game it is completely over.

“I said a lot in the past because it is pure emotion, he came here to win the game or get a point, to make Champions League qualification, and I respect that a lot.

“But what he has to learn is to finish it with the final whistle and he didn’t do that.

“In a moment like this in an argument you want to say something to hurt the other person.

“I have no problem with that but at the final whistle close the book and he didn’t do that and that is what I don’t like.

“Speaking afterwards about it like this, that’s not okay, Frank has to learn this and he has a lot of time to learn as he is a young coach.

“During the game, words used no problem at all but final whistle… we are not arrogant, we are pretty much the opposite.”

The issue gained even more prominence as a video was posted online highlighting the technical area spat in which Lampard directed four-letter expletives at the Liverpool bench.

His words were exacerbated as, in an empty stadium, everything could be heard clearly and the Chelsea boss admits he is sorry for his actions.

“I think in terms of the language I used, I do regret that, because I think these things get replayed a lot on social media,” he said,

“I’ve got two young daughters who are on social media, so I do regret that.”