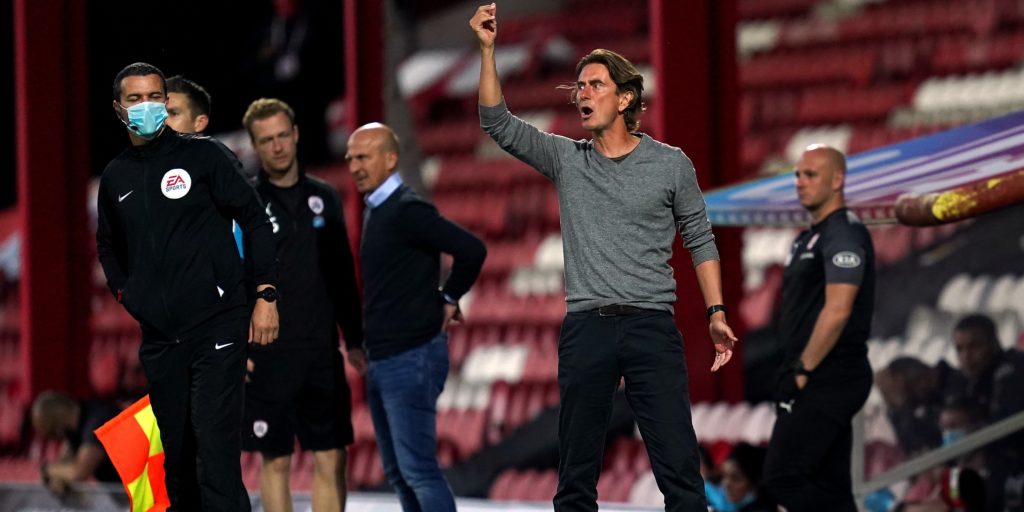 The Bees finished 11 points above semi-final opponents Swansea and beat them home and away during the season.

Brentford boss Thomas Frank has vowed the Bees are ready to “fight” their way to the Premier League after agonisingly missing out on automatic promotion.

The Bees swarmed all over opponents either side of the coronavirus lockdown and won eight consecutive games to move within touching distance of the top flight.

But shock defeats to Stoke and Barnsley crushed that dream, at least for now, and sent them into a Sky Bet Championship play-off semi-final with Swansea.

“It was painful and hurt a lot on Wednesday night,” Frank said, reflecting on the 2-1 home defeat to lowly Barnsley that allowed West Brom to claim the second automatic promotion spot behind champions Leeds.

“It was a slightly better feeling when I found that the sun actually rose again on Thursday morning.

“There’s only two options in life. You can sit down and cry, think the world is unfair and things are against you.

“Or you can stand up and fight. Of course that’s what we have chosen to do – and we are ready.

“Everybody said before the season Brentford in the top-six would be a fantastic result. But we fought for the top two. Remarkable.

“So we need to remind ourselves about this, that we are not the only team in the world that didn’t win that (last) game and move on.”

Brentford finished 11 points above Swansea and beat them 6-1 on aggregate during the season – 3-0 at the Liberty Stadium and 3-1 at Griffin Park.

And Frank believes those games will count for something in the heat of play-off battle.

“It’s natural for the players (to remember),” he said. “They know it, we know it and Swansea know it that we won these two games.

“That should give us confidence going into these two games.

“They will be two different games with two ways of playing and possible extra time.

“It will be slightly different, but we need to take the confidence from those wins with us in these games.”

Frank hailed forward Said Benrahma as “the best player in the Championship” after Brentford won 3-0 at Swansea in October.

The Algeria international scored one of his 17 league goals that night and the celebrated ‘BMW’ strike force of Benrahma, Bryan Mbuemo and Ollie Watkins have 57 goals between them this season.

But Swansea have their own match winner in Rhian Brewster, the Liverpool youngster who has scored 10 times since his January loan move.

“Rhian is a top player, I really like him,” Frank said. “He has a great future ahead of him.

“He has the potential (to play for England) in the future. He is an unbelievable finisher.”

While Brewster could be back at Liverpool next season, it is probably now-or-never for Brentford as far as this squad of players is concerned.

Premier League clubs would almost certainly start circling for Benrahma and company should the Bees miss out on promotion.

Frank said: “I am still convinced this group of players love to fight and do everything they can to go in the Premier League with Brentford.

“If there’s one team they want to play in the Premier League for it’s Brentford.”