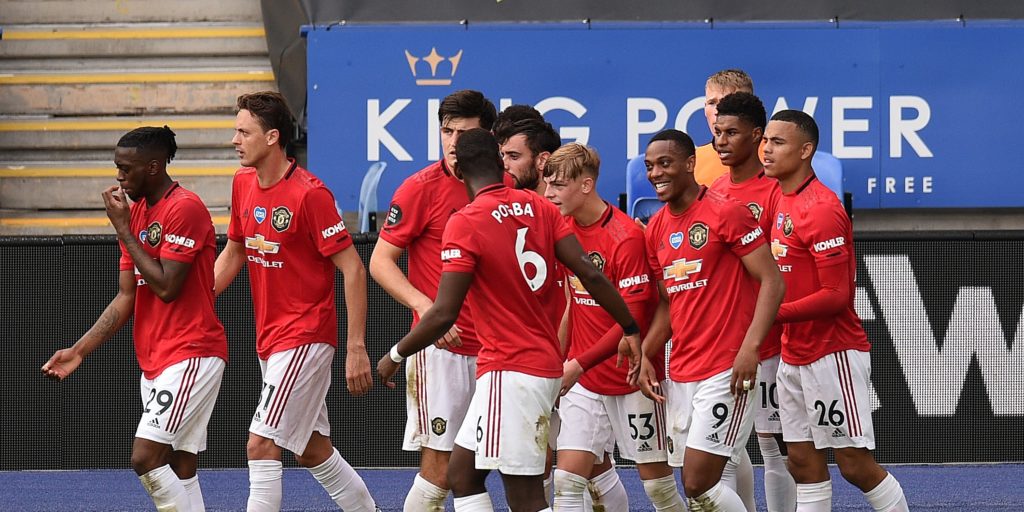 United finish third in the Premier League as Leicester were forced to settle for fifth.

Bruno Fernandes and Jesse Lingard fired Manchester United back into the Champions League to deny Leicester a fairytale finish.

United continued their resurgence under Ole Gunnar Solskjaer as they clinched third in the Premier League ahead of Chelsea.

Leicester have been forced to settle for the Europa League after the winner-takes-all clash at the King Power Stadium and their frustration was compounded after Jonny Evans was dismissed in injury time.

Victory would have sent Brendan Rodgers’ side into the Champions League at United’s expense but they have just fallen short.

Jamie Vardy, who won the Golden Boot with 23 goals, hit the woodwork for the hosts but the Foxes end the season fifth.

They needed to arrest a winless run against the sides above them this season, having collected two points from a possible 21.

Their only victory over United in 23 games was a 5-3 win in 2014 and another failure saw them miss out on the top four.

Not that the season should be viewed as a flop but after losing a 14-point lead over United they still have reason to be disappointed.

The Foxes created chances, Nemanja Matic gifting them an early one when he presented the ball to Kelechi Iheanacho and the striker teed up Wilfred Ndidi to drill just over from 20 yards.

Mason Greenwood guided a header over for United but Leicester were the better side in a game which never lived up to its billing.

Iheanacho continued to find space and scuffed a shot which David De Gea spilled after 25 minutes with United vulnerable to the Foxes’ quick breaks.

Solskjaer’s side knew their fate was in their hands but failed to find serious first-half momentum even if Fernandes had a goal correctly ruled out for offside.

Marcus Rashford curled over after James Justin missed Paul Pogba’s pass and the England striker was denied by Schmeichel in first-half injury time.

Fernandes’ corner came to the forward at the far post and, after he collected himself, his fierce strike was beaten away by the goalkeeper.

Justin was forced into an excellent tackle to halt Anthony Martial after Matic’s pass split the Leicester defence a minute after the restart.

United tried to exert some pressure on the Foxes yet the hosts held firm and went closest to breaking the deadlock after an hour.

Victor Lindelof brought down Vardy on the left and the striker then flicked Tielemans’ free kick onto the angle of post and bar.

It proved to be Leicester’s best chance with Fernandes, so often United talisman since his January arrival, striking with 19 minutes left.

His inch-perfect throughball found Martial and a combination of Evans and Wes Morgan took the striker out.

Fernandes then rolled in his 10th goal of the season from the spot to leave Leicester with no way back.

Harvey Barnes fired at De Gea and Demarai Gray curled wide but the Foxes finished with 10 men after Evans saw red for a lunge on Scott McTominay in stoppage time.

Lingard then rubbed salt into the wounds when he tapped in after robbing Schmeichel as the goalkeeper tried to dribble past him.