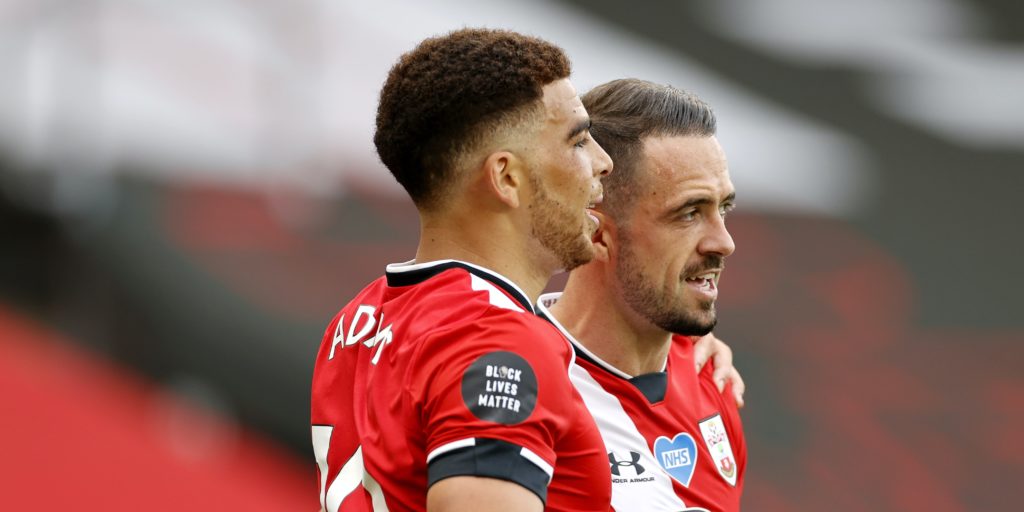 Che Adams’ brace inspired Southampton to an impressive 3-1 comeback victory against his former club Sheffield United as Ralph Hasenhuttl’s men ended the season on a high.

Chris Wilder’s side have earned plenty of plaudits for a superb first season back in the Premier League and Saints also deserve immense credit for the way they have turned relegation form around.

Nobody could have foreseen Saints finishing 11th when they were humbled 9-0 by Leicester in October, but nine months on they blunted the Blades as Adams’ double and a Danny Ings penalty secured victory at St Mary’s.

Saints have been one of the stars of ‘Project Restart’ and head into the summer on the back of a seventh match unbeaten – something that had looked unlikely during a shaky first half.

Wilder’s men took the lead through John Lundstram and would have put the match to bed had the midfielder not been denied a second by the superb reflexes of Alex McCarthy.

Saints overcame that wobble and kicked on after the break, with Adams following a superb near-post finish with another emphatic strike midway through the second half.

Ings scored a penalty late on but fell one goal short of the Golden Boot after a season to cherish for the striker, with the Blades ending the season in ninth.

Play got off to a scrappy start at St Mary’s, where the big pre-match talk revolved around the omission of Pierre-Emile Hojbjerg amid interest in a player that has no intention of extending his deal beyond next summer.

After a scrappy start to proceedings, Billy Sharp went close to opening the scoring against his former club after all too easily beating Jannik Vestergaard to get away a shot that McCarthy did well to stop.

It was a warning shot that Southampton failed to heed, with Wilder’s side going ahead in the 26th minute as a cross from the left somehow found its way through to Lundstram to score with a low finish.

That setback for the hosts was compounded by Stuart Armstrong’s early withdrawal and matters would have worsened had McCarthy not produced a top-class save to deny Lundstram scoring his second.

That outstanding stop gave the hosts hope and Ings saw an effort deflected wide, with substitute Will Smallbone and Oriol Romeu having chances as the Saints belatedly showed signs of life.

Hasenhuttl’s men returned from the break strongly and drew level within five minutes of the restart.

Patient build-up cranked up the pressure and Adams raced behind onto a prodded ball, firing past Dean Henderson at his near post with a finish as confident as it was solid.

Smallbone curled over the bar as Saints’ pressure continued, but Romeu saved the day after McCarthy threatened to undo his good work by passing straight to Sharp.

There was fury on the United bench claiming McCarthy handled outside the box, before Jack Robinson produced an outstanding last-ditch challenge to stop Adams lashing home from close range.

But Adams would not be denied for long and lapped up the loose ball after Kyle Walker-Peters’ effort was blocked, continuing to thrash past Henderson in the 71st minute.

Frustration was bubbling in the Blades camp and they fell further behind in the 84th minute. Ings was taken down by Oliver Norwood and the striker lashed home the spot-kick as Saints secured an all too rare home victory.