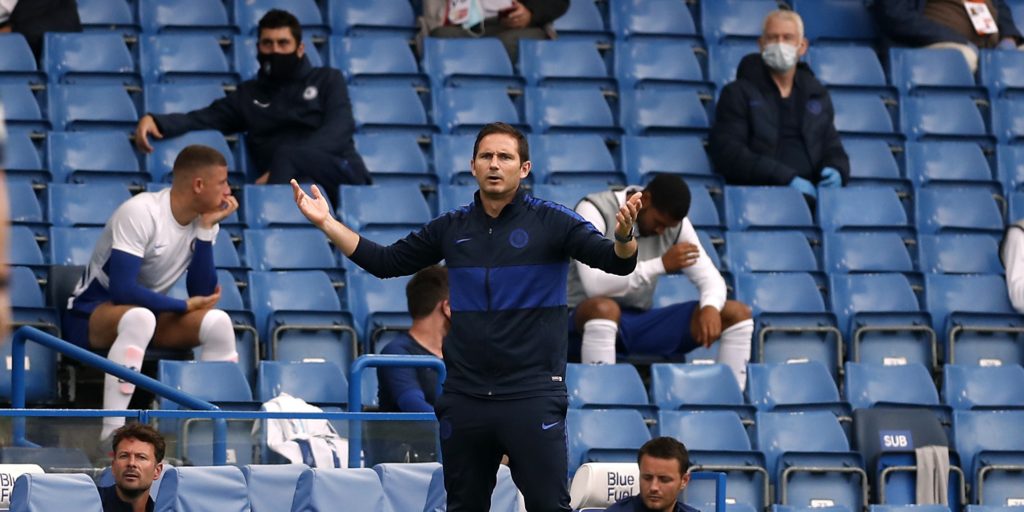 Mason Mount and Olivier Giroud were on target as the Blues ended the Premier League season with a 2-0 win over Wolves.

The Blues sealed a fourth-place finish with a fine 2-0 win over Wolves, with Mason Mount firing a smart free-kick and teeing up Olivier Giroud at Stamford Bridge.

Leverkusen midfielder Kai Havertz could yet join the Blues this summer, with Chelsea also weighing up recruiting a new goalkeeper and further defensive reinforcements.

Lampard insisted his decision to start veteran Willy Caballero ahead of Kepa Arrizabalaga revolved only around the Wolves clash, but the Blues could yet change their goalkeeping situation in the close season.

While Chelsea boss Lampard wants to keep his cards close to his chest on summer targets, he did acknowledge that Champions League qualification carries a bearing.

Asked if reaching the Champions League will make recruitment easier, he said: “In brutal honesty I would say yes. Not to say exactly where that will go, because that’s not a conversation today off the back of the game straight away.

“We know that the economics of the Champions League are big, we know that.

“We know the prestige, top players want to play in the Champions League.

“The top players that are here already, even the young players, they want to play in the Champions League.

“To get too far ahead of ourselves and to be concerned for what it might mean from the outside is not a question for today, it’s a question for the players that have produced today.

“That can improve anyway, we can all improve.

“But if we’re looking to recruit in certain areas then I think it may help, but those are conversations for after Arsenal, after Bayern Munich, see how we go, because now we’ve had a good year, we want to have a better year next year.

“So we’ll try to better ourselves in any way possible.”

Refusing to let Kepa be the focus of Chelsea’s defensive shortcomings this term, Lampard insisted he will put aside the club’s goalkeeper situation until after the FA Cup final against Arsenal and the Champions League trip to Bayern Munich.

“The idea that we haven’t kept enough clean sheets is definitely not just a reflection of our goalkeeper,” said Lampard.

“That’s something that we have to work on as a team, look at how we train, maybe how we recruit generally going forward. But I don’t want to pinpoint it on Kepa today.

“That was a decision today probably on recent form, recent situations for him, he’s had a tough time.

“And I felt Willy coming in off the back of a good performance against Manchester United last week would be what we needed today.

“So I don’t want to jump forward beyond the Arsenal game next week. It would be wrong.

“The squad is really strong as we are and I want it to stay that way for one more week domestically and then going to Bayern Munich. Looking forward to next season will happen after that.”

Wolves failed to secure an automatic spot in the Europa League thanks to their costly Chelsea defeat, with Tottenham swiping a sixth-place finish.

The Molineux men could still qualify for Europe’s second-tier contest should Chelsea beat Arsenal in the FA Cup final.

Wolves would even reach the Champions League should they win this season’s delayed Europa League, and with less than two weeks until facing Olympiacos, manager Nuno Espirito Santo knows that can be his side’s sole focus.

“The season is not finished yet, it’s not over for us yet; we have 10 days to prepare a game,” Nuno said.

“The draw against Olympiacos is what we have to focus on. We have to play a good game, because that is important. It’s going to be very hard for us next Thursday because Olympiacos are a good team.

“This is what we have to focus on. What happens (in the FA Cup final) happens, but we should do things so we deserve it.”

Currently both Wolves and Chelsea are looking to finish in the top four so what odds are being offered see Efirbet.com to see who is favourite to get Champions League action next season. It will be interesting to see if Chelsea can make that extra step up and deliver.