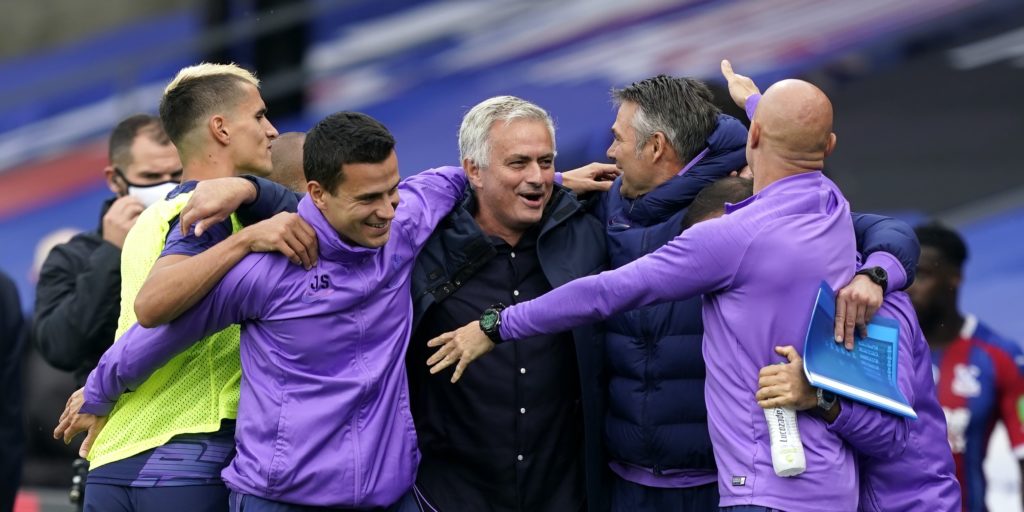 Tottenham boss Jose Mourinho is keen to get his side back “where we belong” after they sealed Europa League qualification with a 1-1 draw at Crystal Palace.

Spurs were 14th when the Portuguese took over in November but he has steered them to sixth place after they finished above Wolves on goal difference.

It was not done in style after a nervy draw at Selhurst Park, where Harry Kane’s goal was cancelled out by Jeffrey Schlupp, with Mourinho admitting he was “ultra pragmatic” after he found out Wolves were losing at Chelsea.

Mourinho has promised to embrace the Europa League next season, after four years in the Champions League for the club, while looking to improve on Premier League form.

“What we can do of course is improve,” he said. “When all the players are available we showed in this last period where we belong. I don’t know, maybe in this period, after lockdown, we finished third or fourth in the table.

“Of course as a squad the main thing is to keep our very good players and after that improve the squad.

“I enjoy working with Steve (Hitchen – Spurs’ chief scout) in this organisation. We are very connected with (chairman) Mr (Daniel) Levy and the board and we’re going to do what is possible to do and hopefully next season we can give it to the fans a very good season.”

Mourinho has masterminded a six-game unbeaten run to deliver qualification, overturning a seven-point gap from sixth after a loss at Sheffield United earlier this month.

“I think the players deserve,” he said. “Of course everybody that one day plays Champions League doesn’t want to go back and play Europa League but (it) was the only thing possible after such a difficult season for club, for the players and in my case also for myself.

“But arriving 14th and handling things is not bad at all. I am quite happy next season we play in Europa League and it’s just a question to motivate ourselves for that competition and try to motivate the fans to support us and try to do something beautiful.”

Palace were full value for their draw and could even have won it.

After Kane’s deadly finish in the 13th minute Spurs failed to have another shot on target and Palace deservedly levelled through Schlupp’s second-half strike.

The draw means they stopped a seven-game losing streak and end the season on a positive.

“It could have been all three. It was a good performance against a top-quality side and I think if any team was to win it it was going to be us, I think we shaded it,” boss Roy Hodgson said.

“But the important thing was to break this very unfortunate run of results that we have had, where I don’t think fate has been very kind to us. We have played better than our results suggest.

“(I’m pleased) to actually finish the season on a positive note. We have gone out again with a wounded team, and taken on Tottenham and deservedly taken a point from them.

“That was the worst possible start. But we never gave up, we got back into the game, we created chances and in the second half we got our reward. It was important to break that sequence because it is not a sequence anyone wants to carry.

“It has been a very bad Covid period for us, not just in terms of results but also in terms of the burden we have had to face.”