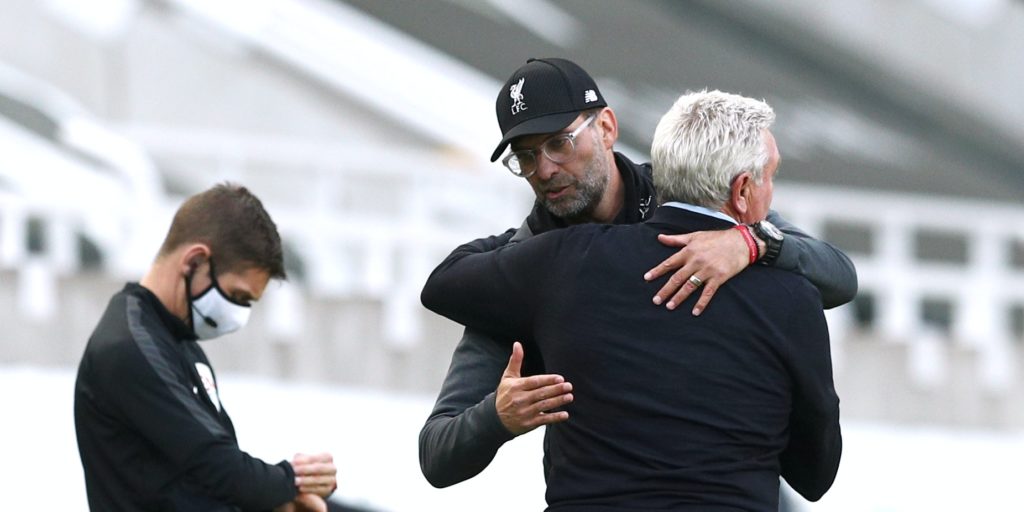 The Reds came from behind to end a remarkable season with victory on Tyneside.

A 3-1 final day win at Newcastle ensured the Reds maintained their 18-point advantage over Manchester City and left Klopp purring over his squad.

Asked to reflect upon a season which had ended the club’s 30-year wait for another title, the German said: “The football part of the year was exceptional, absolutely exceptional, 99 points…

“How we think about it, it started on June 1, 2019 because yes, that was the last game of the last season, but for us, it was pretty much the first game of a pretty special time, so after that the European Super Cup, the Club World Cup and now the Premier League is absolutely exceptional.

“Ninety-nine points after having 97 last year, absolutely exceptional. The boys have shown a consistency which is really second to none, and that’s what we had to do, we knew that.

“After 97 points last year, everybody thought we were unlucky a little bit, but we respect the opponent (Manchester City) a lot and it was clear that if you want to be ahead of them, you need to be nearly perfect and the boys were nearly perfect, and that’s why we have 99 points.

“That’s it. It will have a special place in my own memories.”

Liverpool did not have things all their own way on Tyneside – indeed a team featuring five changes with first-choice front three Mohamed Salah, Roberto Firmino and Sadio Mane starting on the bench fell behind to Dwight Gayle’s strike with just 24 seconds gone.

However, Virgil Van Dijk’s equaliser and second-half strikes from Divock Origi and substitute Mane, who curled home a brilliant third at the death, secured the points.

Klopp said: “The whole game and maybe this goal as well really sums the season up, just difficult, but not impossible, give it a go.

“That’s what the boys have done the whole year and what they did at this moment. It was just a brilliant piece of football.”

Opposite number Steve Bruce headed into a welcome summer break still seeking clarity on the ongoing takeover saga – PCP Capital Partner’s Saudi-backed bid remains in the hands of the Premier League – ahead of talks on Wednesday with current owner Mike Ashley, who thanked the staff and players in a Zoom call after the final whistle.

Bruce said: “We need clarity. Is it going to happen or not? How long do we want? It is a frustration. The club needs that clarity, all of us, so let’s hope we can get that in the next few days or week or whatever it may be.

“Everybody wants the club to do well, but as I keep saying, we need clarity on the situation with the takeover and if that’s not going to happen, we need to know quickly so it can be business as usual.”