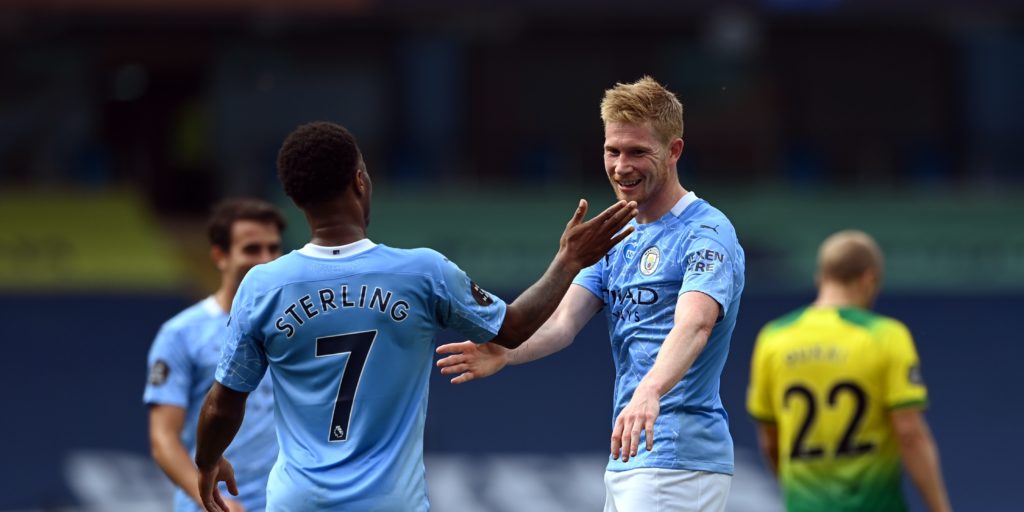 Manchester City took their goal tally past 100 as they wrapped up their Premier League campaign with a thumping 5-0 win over relegated Norwich.

Kevin De Bruyne struck twice and equalled the competition’s single-season assist record by setting up Raheem Sterling in a one-sided contest at the Etihad Stadium.

Gabriel Jesus and Riyad Mahrez also got on the scoresheet in a game that saw veteran playmaker David Silva make his final Premier League appearance for the club.

To round off a good day for Pep Guardiola’s City, Ederson registered a 16th clean sheet of the campaign to win the Golden Glove.

The game lacked only a goal for a Silva – and a crowd to enjoy it – but there will be opportunities in the Champions League next month.

Bottom side Norwich, who beat City earlier in the season, offered little despite a bright opening, their dismal run-in coming to a sorry end.

They initially looked keen to to sign off with a flourish and thought their positivity had brought a goal after eight minutes as Onel Hernandez found the net.

The Cuban broke away from the defence and cut inside to send a low shot inside Ederson’s right-hand post but VAR intervened to deny him for offside.

City took immediate advantage of that reprieve as Sterling led a charge at the other end. The England forward looked to play in Silva but it was Jesus who poked home from close range in the ensuing scramble.

City pressed for more and De Bruyne had a shot blocked before Tim Krul saved from Kyle Walker and Ben Godfrey got in the way of Jesus’ rebound attempt.

The Canaries spurned a glorious chance to equalise after City lost possession in midfield and Teemu Pukki was sent racing clear on goal. Ederson came out to smother his shot and Todd Cantwell put the follow-up over.

Phil Foden then forced a good save from Krul and Silva went close to a farewell goal as he dragged a shot wide.

It came to De Bruyne to double the lead on the stroke of half-time, the Belgian showing great footwork outside the box before curling an inch-perfect shot into the top corner.

The hosts stayed on the attack into the second half with substitute Ilkay Gundogan firing narrowly wide moments after coming on.

Silva continued to hunt his goal and found time and space in the area to turn and shoot but Krul produced a fine one-handed save.

Another chance came just after the just after the hour as De Bruyne – chasing the assists record – broke into the area and slid across towards Sterling but Zimmermann forced it onto the post.

Mahrez then volleyed over before Jesus tested Krul from the edge of the area.

Sterling finally claimed the third 10 minutes from time, taking City’s league goal tally for the season to 100, when he ran on to a delicate through-ball from De Bruyne and slipped it past Krul.

The goal also earned De Bruyne a record-equalling 20th assist of the season.

There was still more to come from City and Mahrez took advantage of poor defending to slot home a fourth. De Bruyne wrapped up the scoring by slamming in a shot off the post in the dying moments.