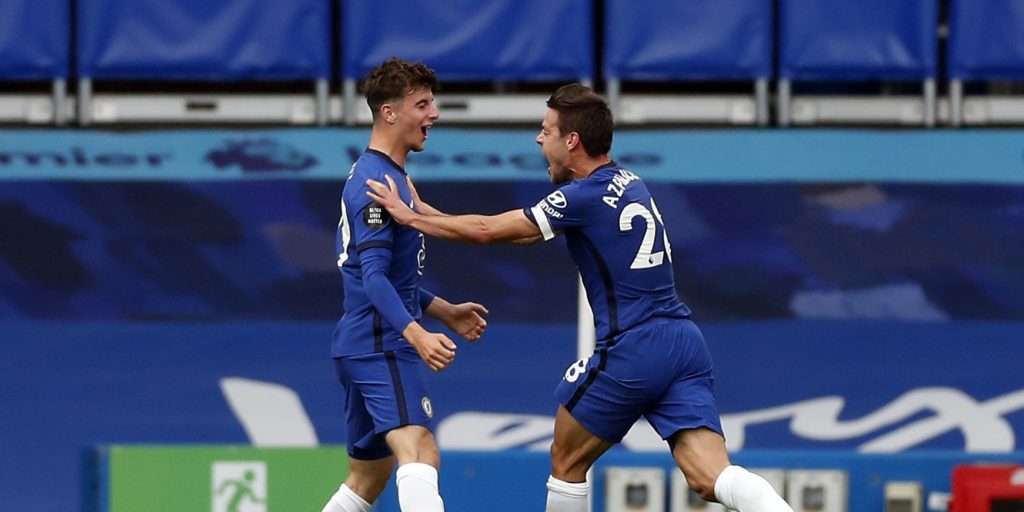 Mason Mount sent Chelsea into next season’s Champions League with a sumptuous free-kick and an assist for Olivier Giroud in the Blues’ 2-0 Premier League win over Wolves.

Mount’s inch-perfect dead-ball strike put Chelsea ahead in first-half stoppage time, before the 21-year-old teed up Giroud for a fine finish less than three minutes later.

Wolves’ defeat meant the Molineux men failed to finish sixth, with Tottenham sneaking ahead of them instead with their draw at Crystal Palace.

England midfielder Mount proved his huge value to Lampard’s Chelsea yet again, toasting his 51st appearance of the season with a man-of-the-match turn.

Mount has become Chelsea’s first academy graduate to make more than 50 appearances in all competitions in his debut senior campaign at the club.

The versatile creative talent left his most important league contribution to last, however, as the west Londoners finally rubber-stamped Champions League qualification.

Back in November, Mount posted a social media video of his younger self scoring a free-kick in Chelsea academy training, and talking through his dead-ball style.

“I try to base my free-kick on Ronaldo, hit the ball by the valve, and it moves; that’s all you do, top corner,” said the fresh-faced Mount in that throwback clip.

That’s all Mount did with his free-kick against Wolves on Sunday. But even though the richly-talented midfielder has been making dead-eye dead ball finishes look easy all his life, his virtuoso performance here carries major repercussions for the Blues.

Timo Werner was on hand to watch his new team-mates seal that Champions League berth for next term, and the Germany striker will now be even more excited about what is in store after his GBP 54million RB Leipzig switch.

Champions League qualification will doubtless boost Chelsea’s pursuit of Bayer Leverkusen’s Kai Havertz, and the further recruits that the Blues will certainly chase this summer.

Lampard’s bold move to drop Kepa Arrizabalaga for veteran Willy Caballero not only paid off as the Blues pulled off a clean sheet – but could also offer another sign of Chelsea’s intent to seek a new goalkeeper this summer.

Caballero performed adeptly as the Blues hit back from their 5-3 midweek humbling at Liverpool to shut out Wolves.

But at the age of 38 he is obviously not Chelsea’s long-term option, and Lampard is not hiding his dissatisfaction with Kepa’s form.

For the day itself Caballero fitted the bill however, and could now well retain his place for the FA Cup final against Arsenal.

At the death of a gritty first-half devoid of gilt-edged chances for either side, the Blues took control.

First Mount stepped up and whipped home a fine free-kick, then he played in Giroud for the Frenchman’s astute finish.

Not only did Giroud clip the ball away from Rui Patricio, the in-form hitman then hustled around Wolves skipper Conor Coady to angle home on the slide.