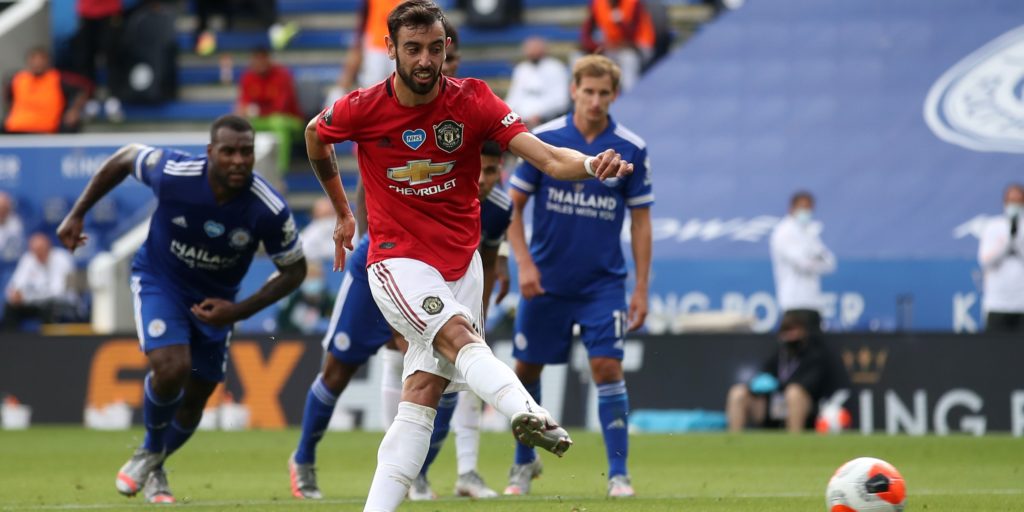 United are on the brink of the Europa League quarter finals and have qualified for next season’s Champions League.

Bruno Fernandes has targeted Europa League glory after leading Manchester United back to the Champions League.

The midfielder scored in United’s 2-0 win at Leicester on Sunday as Ole Gunnar Solskjaer’s side sealed third in the Premier League.

It meant they return to Europe’s elite competition next season after a year’s absence and can now focus on trying to win the Europa League.

United lead LASK 5-0 from the first leg of their last 16 tie, and face Istanbul Basaksehir or Copenhagen in the quarter finals as part of a mini tournament due to be played in Germany from the last eight onwards.

“Now our focus is on the Europa League because this is a really good trophy and we want to win,” he said.

“I came to Manchester to win trophies. We need to play every game to win. If we go into the Europa League and win every game, we know we’ll win the trophy.

“But we are not happy enough because we know this club and these players, they can bring much more for the club.

“I think we have qualities enough to fight for some titles – more than one title. I think we need to win some trophies and then we’ll be really happy.”

“We feel good, it’s what we wanted,” man-of-the-match Fernandes told MUTV. “We trained hard and we worked hard for this moment. We know the only thing we could achieve this season was getting into the Champions League, so we fought hard for that.

“Of course, playing Champions League is always special and I hope it can be with the supporters, that will be more special,

“We deserve to be in the best games, in the best European competition. Nothing against the Europa League, but everyone knows the best competition is the Champions League.”

Leicester finished fifth and qualify for the Europa League after losing a 14-point advantage they held over United in January.

It remains the Foxes’ second highest finish in the Premier League, after their title win in 2016, and Demarai Gray insisted they should still be proud.

“Obviously being so close to the Champions League, that hurts,” the winger told LCFC TV. “All around, it’s been a great season, finishing fifth and (we’ve got) Europa League football to look forward to.

“So it’s disappointing, but overall, I think everyone should be proud of themselves and we’ve got a lot to look forward to next season.

“We pushed to the end because anything can happen. It didn’t happen. It’s just one of those games, which is unfortunate, because there was a lot to play for.

“I don’t think we should be too negative at all. European football for the club is a great achievement.”

Manchester United will be looking to push through to the knock out stages so what odds are being offered see to https://silentbet.com/  and who else is also favourite to succeed in the Champions League this season. It will be interesting to see if United can deliver on Fernandes’ ambitions.