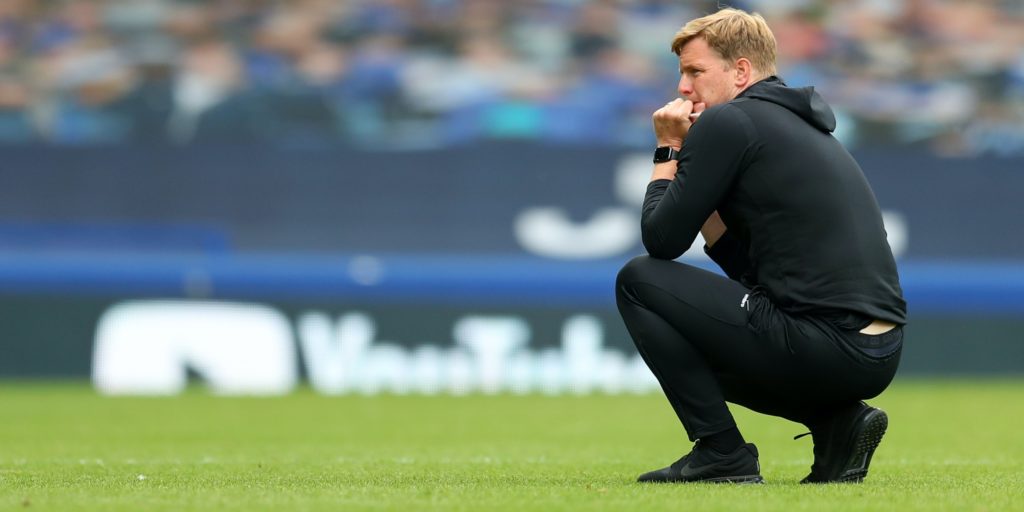 The Cherries dropped out of the top flight as Villa secured the point they needed.

Bournemouth manager Eddie Howe challenged the club to quickly build again following relegation from the Premier League as Aston Villa stayed up on a dramatic final day of the season.

Villa had needed at least a point to secure another campaign of top-flight football – and looked like they had made sure of safety when captain Jack Grealish scored with just six minutes left.

However, the Hammers – who had already guaranteed their own survival – went up the other end to equalise through Andriy Yarmolenko, which set up a tense finale.

There was no more late drama, though, as Villa did enough to retain their Premier League status, having come up via the play-offs last season.

Goals from Josh King and Dominic Solanke – either side of Moise Kean’s equaliser – and a late effort from Junior Stanislas gave Howe’s side a 3-1 win at Everton.

But it was too little too late for the Cherries, who drop out of the top flight for the first time since promotion in 2015.

Whether or not former player Howe will be at the helm when the new campaign kicks off again in September, though, remains to be seen.

“I am determined for Bournemouth to get there, back in the Premier League. In terms of the future and what it looks like, that is for another day,” Howe said.

“I think the next step for for me is to speak to the owner and the directors and see where we go from here. We need to have a strong vision of the future.”

Everton defender Leighton Baines announced his retirement from football following the end of the season.

Watford’s relegation, meanwhile, was confirmed after losing 3-2 at Arsenal.

The Hornets – who sacked manager Nigel Pearson with just two games left and put Hayden Mullins in caretaker charge – found themselves 3-0 down after 33 minutes, and a spirited fightback was not enough.

At the other end of the table, Manchester United won 2-0 at Leicester to make sure of third place and Champions League football, while Chelsea finish fourth after a 2-0 home win over Wolves.

United finally broke the deadlock against the Foxes on 71 minutes through penalty from Bruno Fernandes.

Jamie Vardy – whose 23 goals saw him win the Golden Boot – clipped the outside of the post with a header.

Then after Jonny Evans had been sent off for a foul on Scott McTominay, United made it 2-0 when Jesse Lingard capitalised on a mistake from Foxes goalkeeper Kasper Schmeichel.

Chelsea warmed up for next week’s FA Cup final against Arsenal with a 2-0 home win over Wolves, who had themselves been chasing European qualification.

Champions Liverpool ended their campaign with a 3-1 win at Newcastle, having fallen behind in the first minute to a goal from Dwight Gayle.

Runners-up Manchester City thrashed relegated Norwich 5-0, with Kevin De Bruyne scoring twice, also taking his assist tally to 20 for the season, and David Silva captaining the side on his final Premier League experience.

Tottenham finished sixth after a 1-1 draw at Crystal Palace to qualify for the Europa League.