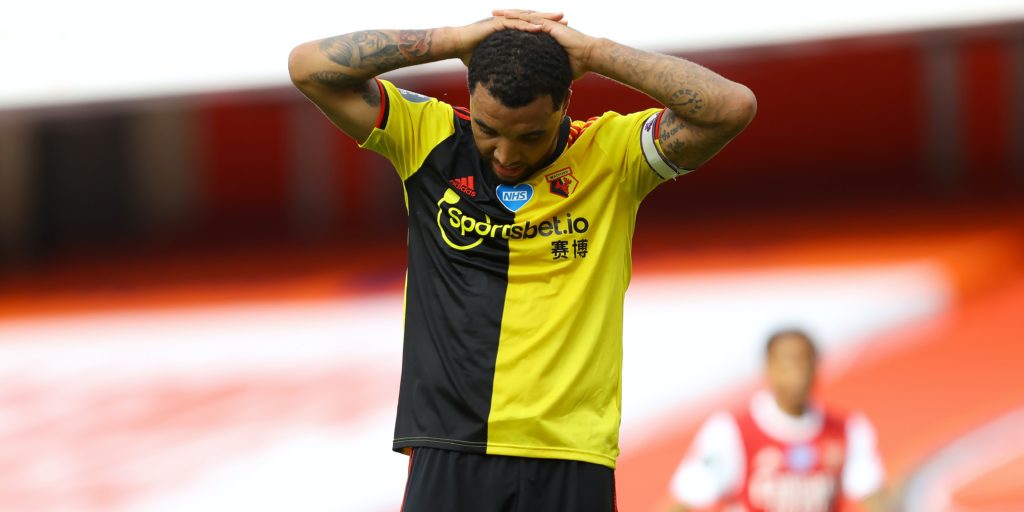 He delayed surgery on a knee injury until after the final game of the campaign.

Watford captain Troy Deeney has warned his family he will be difficult to be around as he comes to terms with relegation from the Premier League.

The Hornets lost 3-2 at Arsenal on Sunday as their five-year stay in the top-flight came to an end.

They fell three goals behind as a Pierre-Emerick Aubameyang penalty and overhead kick sandwiched Kieran Tierney’s first goal for the hosts.

Deeney pulled one back from the penalty spot and former Arsenal man Danny Welbeck struck to give them hope – but it was not to be and Watford will be plying their trade in the Sky Bet Championship next season.

After a decade at the club, Deeney has admitted he is unsure where his future lies but the 31-year-old admits relegation has left him hurting.

“Of course it hurts,” he told Watford’s official website.

“Maybe I’m not going to show it but it’s the missus and the kids who will see it over the next two weeks, so I apologise to them in advance.

Deeney also confirmed he could have opted to sit out the last weeks of the campaign as he struggles with a knee injury, which will be operated on in the coming days.

“The knee is not great,” he added.

“I didn’t ultimately want to throw it in. I could have easily done it four weeks ago when I found out I had another injury.

“I could have easily said: ‘Let me get my knee done’, sat around and thought ‘this is not my fault, I have missed so much of the season’ – but that is not my character.

“It is 10 years (Deeney has been at Watford) in probably about two weeks’ time. I was here when we had three stands, 20 players and seven of them were youth-team products. So we have got to be realistic and understand where we are at.”

While Arsenal prepared for Saturday’s FA Cup final with a victory, they will have to be better than they were for large periods against Watford if they are to beat Chelsea at Wembley.

Head coach Mikel Arteta, going in search of his first piece of silverware as a manager, felt the fact Watford were fighting for survival while his players were challenging for very little may have seen his side lose the edge he has backed them to find in the final.

“It will be a completely different game,” he replied when asked how much his side will need to improve to lift a record 14th FA Cup.

“First of all from the mental side it will be equal. How much they (Chelsea) want it compared to how much we want it.

“I don’t think that was the case today because of the necessity Watford had, the way they had to approach the game was different to us and you can see that. Hopefully Saturday will be very different.”

Arteta confirmed after the game that Shkodran Mustafi’s hamstring injury will not only see him miss the FA Cup final but also the start of next season.

Mustafi joins fellow defenders Calum Chambers and Pablo Mari in the treatment room, with Arteta admitting the club need to “address” that in the transfer market.

One option already available to Arteta is Sokratis Papastathopoulos, who has played just one minute of football since the season resumed.

The 32-year-old was a regular under former boss Unai Emery but has slipped down the pecking order since Arteta arrived in December.

Despite his lack of football, the PA news agency understands Sokratis will not ask to leave the club this summer and is willing to stay and fight for his place in the team, with his contract having another year to run.