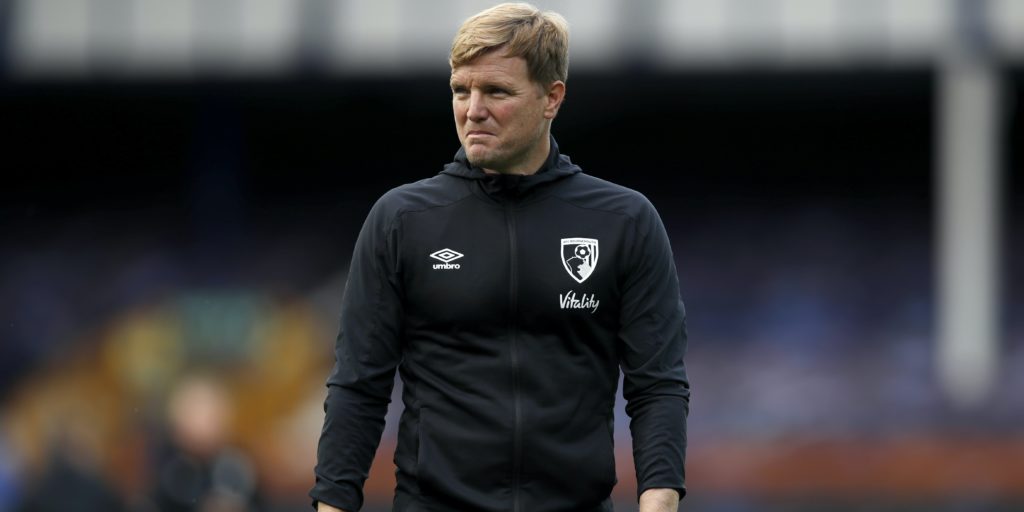 Bournemouth will return to the Sky Bet Championship.

Bournemouth boss Eddie Howe said discussions about his future were “for another day” after his side suffered Premier League relegation.

Howe is English league football’s second longest serving manager having begun his second spell at the Vitality Stadium in October 2012.

Here, the PA news agency takes a closer look at what could be next for the 42-year-old.

Move to another Premier League club

In previous seasons there has been repeated speculation about Howe being poached by a so-called bigger club. The obvious question is: who? The Cherries’ poor campaign will undoubtedly have tarnished his reputation, while there are few – if any – top-flight clubs currently in the market for a manager. Links between Howe and the top jobs at Arsenal and Tottenham now seem a distant memory and extremely unrealistic. Mid-table sides such as Everton, Newcastle, Crystal Palace may be more realistic destinations, if they were to suddenly part company with their respective current managers. West Ham, whose failure to beat Aston Villa sent Bournemouth down, could also be placed in that category.

Take some time off

The impact of the coronavirus pandemic has resulted in the longest Premier League season in history. Howe’s side were precariously placed for the duration of lockdown and he has regularly spoken about how the mental toil of a difficult and prolonged campaign has affected him personally. As early as January he revealed work stresses were disrupting family life, while more recently he has talked of being “consumed” by the job and “hurting” at the club’s continued struggles. It is almost eight years since Howe returned to Dorset following a short stint as Burnley boss. A break from the stresses of the game in order to contemplate his next steps is a serious option and would be understandable.

“I am determined for Bournemouth to get back in the Premier League,” were Howe’s exact words after relegation was confirmed following a valiant 3-1 win at Everton. His dedication to the south-coast club is unquestionable and there is no doubting that sentiment. However, Howe did not directly refer to himself as playing a part in trying to achieve that ambition. He spoke of needing to meet with the club’s Russian owner Maxim Demin, chairman Jeff Mostyn and other directors, in addition to a necessity for “a strong vision of the future”. It is difficult to read between the lines but his initial reaction raised major doubts about whether he will continue in his current role. That said, the desire to right the wrongs of this term will surely be a strong incentive.

What does he need to do if he remains?

A major rebuilding job is required by whoever is in charge of the club for next season. Star players such as Nathan Ake, Callum Wilson and Joshua King seem almost certain to be sold which will contribute to trimming the considerable wage bill and soften the financial blow of relegation. There is also likely to be interest in a number of other Cherries players, while a handful of long-serving players are out of contract and seem set to depart. That could leave Howe’s squad looking extremely threadbare. If the club can retain them, building around young talents such as goalkeeper Aaron Ramsdale, defenders Jack Stacey, Lloyd Kelly and Chris Mepham, winger David Brooks and academy graduate Sam Surridge should be Howe’s focus.

A move abroad, to a British club outside the Premier League, or into an international setup are among the other possibilities available to Howe. Each of those options seems incredibly fanciful. Chris Coleman, David Moyes, Nigel Pearson and Alan Pardew are some of the British managers to have recently tried managing European clubs but there is no suggestion Howe’s name could be added to that list. There appears to be no logic in joining a fellow Championship club. Celtic or Rangers may appeal if either of those jobs became available but that is pure conjecture. In the past, Howe has been spoken of as a future England manager. That has never come from him and an imminent role in the international game looks implausible.