Home On This Day On this day: Ramsey rocket stuns Galatasaray 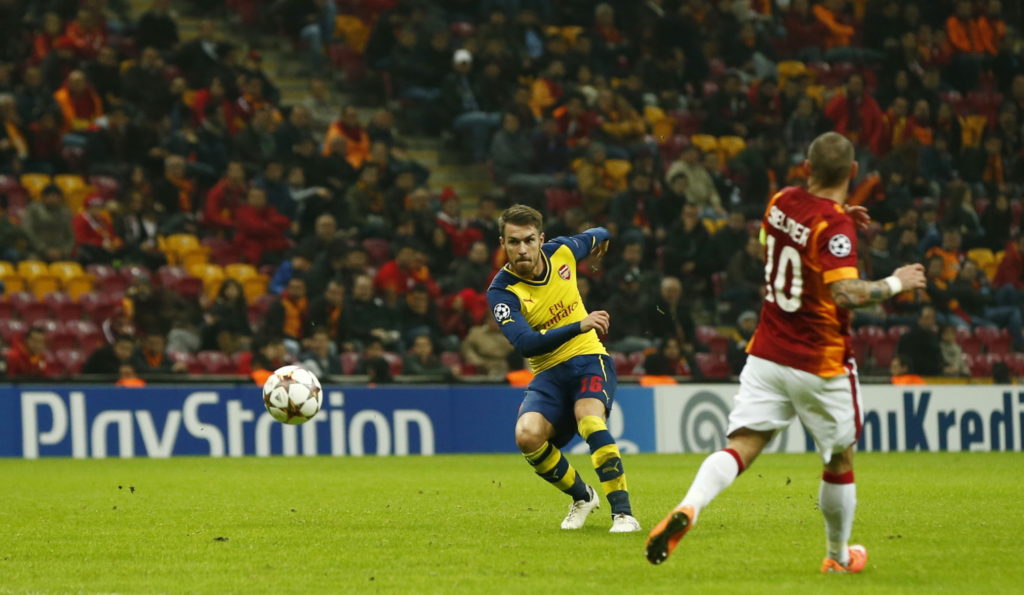 On this day in 2014, Aaron Ramsey scored, arguably, the goal of a lifetime as he fired in a left-footed thunderbolt in Arsenal's 4-1 win at Galatasaray.

Ramsey and his fellow Gunners travelled to Istanbul with qualification from Champions League Group D already secured, shaking off an opening 2-0 defeat to Borussia Dortmund and a 3-3 home draw against Anderlecht, in which now-Fulham striker Aleksandar Mitrovic scored the equaliser for the visitors.

To show what a small world football is, current Gunners skipper Pierre Emerick-Aubameyang scored the second for Borussia in that win for BVB but was still just over three years away from moving to the Emirates.

Despite taking a respectable 13 points from their six games, Arsene Wenger’s men enjoyed a typically tumultuous campaign but the failings of others helped them through and gave them a free hit against a star-studded Gala.

Well, star-studded might be pushing it but they did have Wesley Sneijder and Felipe Melo in their team, as well as emerging Brazilian talents Alex Telles and Bruma.

For Arsenal, Ramsey was one of the senior players in a starting XI that also included Yaya Sanogo and Joel Campbell, as well as World Cup winners Lukas Podolski and Per Mertesacker.

Podolski opened the scoring after three minutes and Ramsey doubled the lead soon after, finishing off a sweeping move with his left foot. It was that same left foot that sealed the points after 29 minutes.

The aforementioned German forward forced a corner after his powerful effort was saved by Sinan Bolat before Joel Campbell’s delivery was well-cleared by Buruk Yilmaz to Ramsey who from all of 30 yards, set himself and drilled the ball into the top corner.

One of the cleanest strikes you will ever see!

On this day in 2014, Aaron Ramsey scored this wonder goal against Galatasaray 🚀 pic.twitter.com/mdPBd9RsE2

The goalkeeper flung himself to his right but had no chance and the Welshman wheeled away, momentarily alone as his team-mates realised what had happened.

To describe the technique, well it is hard to compare with another shot. If we were talking about snooker you’d say he stunned the ball, while in golf it would be a punch shot.

Stunned is exactly was exactly what the stadium was by his effort and that punch in the gut of Gala appeared to take the sting out the game before Sneijder grabbed a consolation on 88 minutes, only for Podolski to make 4-1 in stoppage time.

All looked good for Arsenal after drawing surprise Group C winners Monaco in the last-16 but were naive in the way they approached the first leg at home, being stung by Les Rouges et Blancs 3-1 before falling short in the second leg on away goals.

Ramsey netted his team’s second in the Principality but from the high of his effort in Istanbul, the way Wenger’s side went out in the first knockout round was typical of an underwhelming period for the club where the talent available was not matched by silverware.

Fast-forward to the present day and the 28-year-old is now in Italy having joined Juventus in the summer in search of Champions League glory.

What Gunners fans would give for another moment like the one he produced on December 9, 2014. Heck, what would they give to have the Welshman back after leaving on a free transfer?

The goal from Ramsey perhaps epitomised that era, a moment of pure talent that was never quite backed up.

However, with the club managerless and seemingly lacking direction at all levels, winning their final Champions League group match 4-1 having already qualified before going out in the last 16 is a scenario everyone with an interest in Arsenal must pine for.