Home On This Day On this day: Vermaelen miss sees City shock Gunners 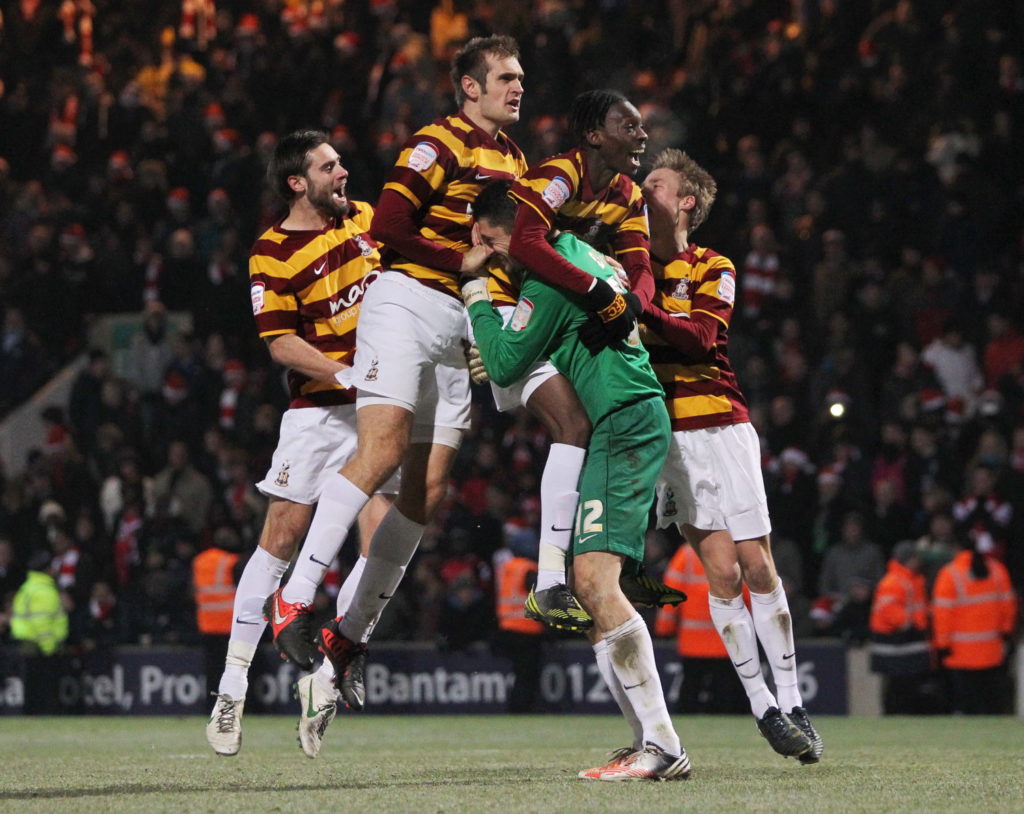 On this day in 2012, League Two Bradford City caused one of the biggest shocks in League Cup history when they defeat Arsenal on penalties.

The pair met in the quarter-finals of the EFL Cup at a freezing cold Valley Parade. The famous old stadium, perched above Canal Road and from below, always looking set to teeter over the edge, was rocking that night as City’s heroes booked their spot in the last four.

A penalty shoot-out was required but that was familiar territory for the Bantams who had won eight successive spot-kick duals before this game.

However, they were still the vast underdogs but were perhaps playing Arsenal at the perfect time, the visitors having won only one of their previous five and were searching for their first major title since 2005.

The Gunners were not taking Bradford lightly, with their team including Wojciech Szczesny, Aaron Ramsey, future World Cup winner Lukas Podolski and an injury-free Jack Wilshere.

It should have been simple and Arsenal enjoyed the early possession, stroking the ball around a skiddy surface but City pressed hard and remained disciplined within their shape.

The Bantams’ hustle and bustle paid off after 16 minutes when Garry Thompson volleys home after Arsenal had failed to clear a free-kick.

That gave Phil Parkinson’s side something to hold onto and that they did for 72 minutes, only for Vermaelen to nod in Cazorla’s brilliant cross in the dying moments.

In reality that should have been the winner, as earlier on, Gervinho had inexplicably missed the target from no more than three yards.

Extra-time was required but it looked for all the world that Arsenal would grind down the hosts down and Cazorla almost broke home hearts, striking the crossbar from 30 yards.

The Spaniard would though prove to be one of the villains of the piece, seeing his opening spot-kick saved by Matt Duke.

Marouane Chamakh then hit the post and although Szczesny saved from both Ritchie Jones and Stephen Darby, the Gunners were still dumped out.

Vermaelen then had the chance to force sudden death. Having saved his side once, the Belgian defender stepped up and sent Duke the wrong way – only to see his effort bounce off the goalkeeper’s left-hand upright.

For a moment, Valley Parade went silent, before erupting in a cacophony of joy.

City would upset another Premier League side in the semi-finals, beating Aston Villa 4-3 on aggregate but the dream would end at Wembley when Swansea’s class told in a 5-0 victory.

There would be some consolation for the Bantams, returning to Wembley to beat Northampton 3-0 in the League Two play-offs to mark a fitting end to a rollercoaster campaign.