On This Day: Friedel nets in Blackburn defeat 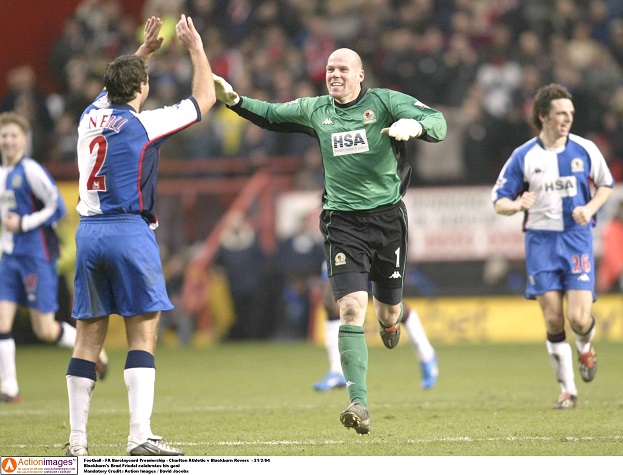 Brad Friedel etched his name in the history books back in 2004 but his goal could not help Blackburn Rovers from suffering a 3-2 defeat at Charlton Athletic.

Although neither Charlton nor Blackburn are still playing in the Premier League, this contest on February 21, 2004, is still fondly remembered not only because a thrilling five-goal show was put on, but also due to the fact goalkeeper Friedel etched his name into top-flight history.

The former United States international, who hung up his gloves in 2015, netted the second goal for Rovers at The Valley and he is one of five keepers to have scored in the PL – the others being Peter Schmeichel (2001), Paul Robinson (2007), Tim Howard (2012) and Asmir Begovic (2013).

Charlton came into the game on a three-game losing, having gone down to Bolton, Chelsea and Tottenham, but they made a superb start when Carlton Cole scored the opener with just 10 minutes on the clock.

The Addicks then doubled their advantage on the 36th minute through Jason Euell, who chested down a cross into the box before poking the ball past Friedel from close range to give the hosts a 2-0 lead at the break.

With less than 20 minutes left on the clock, it seemed Alan Curbishley’s men would comfortably see out the win, but they allowed Blackburn a way back into the game on the 74th minute.

Radostin Kishishev attempted to play a long pass back to his keeper but his ball was intercepted for former Newcastle and Manchester United striker Andy Cole, who rounded keeper Dean Kiely before eventually finishing off.

Then came the huge moment in the 89th minute when Friedel, who came up for a corner, managed to side foot the ball in from eight yards out after a low cross had deflected off a couple of players in the box.

It looked like Rovers had done enough to snatch a share of the spoils but Claus Jensen, on as a second-half substitute, fired in a wonderful half-volley in the second minute of injury time to send the home fans into raptures.

Charlton would end the campaign in seventh position, narrowly missing out on a European finish, while Blackburn ended up 15th, avoiding relegation by a comfortable 11 points.