Home On This Day On This Day: Arsenal stunned by Birmingham at Wembley

On This Day: Arsenal stunned by Birmingham at Wembley 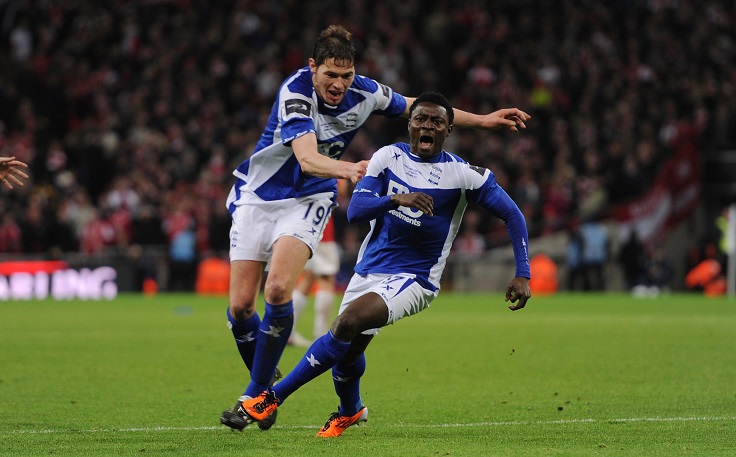 Birmingham City produced a huge upset in the League Cup final on this day in 2011 as Obafemi Martins struck a late winner in a 2-1 victory.

Having lost both Premier League meetings against Arsenal in the 2010/11 season, Birmingham arrived at Wembley as the massive underdogs as they went in search of just their second League Cup trophy, having previously triumphed in 1963.

However, it turned out to be a much tighter affair between the two teams and the Blues should have had a penalty in the early exchanges when Lee Bowyer was brought down by goalkeeper Wojciech Szczesny, only for the midfielder to be wrongly flagged offside. Where was VAR back then?

Birmingham did, though, take the lead in the 28th minute when former Serbia international Nikola Zigic, all 6ft 7in of him, flicked a header in from inside the six-yard box after Roger Johnson had won his initial aerial battle from a corner.

That lead lasted just 11 minutes as the Gunners, who had hit the bar through Wilshere beforehand, levelled the score thanks to a brilliant volley from Dutch maestro Van Persie.

It was a hard-fought battle in the second half, with Keith Fahey striking the post for Birmingham while Arsenal striker Nicklas Bendtner, on as a substitute, forced a good stop from Ben Foster.

With the game looking like it was heading to extra-time, a huge mix-up between Szczesny and Laurent Koscielny inside the area presented an open-goal to ex-Nigeria international Martins, who tapped into the back of an empty net from eight yards in the 89th minute to hand the Blues the trophy.

It was a rare moment of joy for Birmingham that season as they ended up getting relegated to the Championship, although their League Cup win meant they qualified for the Europa League play-off round.

As for the Gunners, they would finish fourth in the standings, qualifying for the Champions League, but they would end the campaign without a trophy.