Home On This Day On this day: Bergkamp stuns St James’ with moment of magic

On this day: Bergkamp stuns St James’ with moment of magic 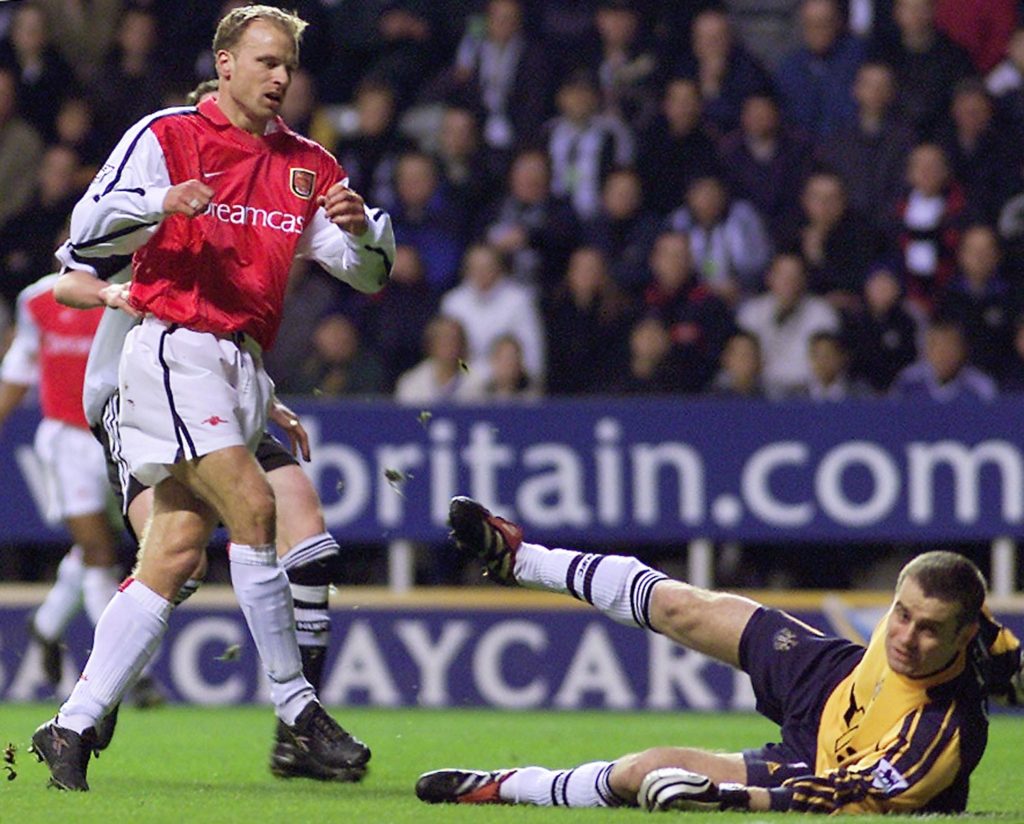 Dennis Bergkamp's turn and finish on this day in 2002 will forever be remembered as one of the finest pieces of skill to ever grace the Premier League.

Johan Cruyff’s turn, Paolo Di Canio’s volley, the Roberto Carlos free-kick, and even the Diego Maradona handball live long in the memory and so is Bergkamp’s deft touch and strike for Arsenal away at Newcastle.

By this time, the Dutchman had excelled in England for seven seasons, joining the Gunners from Inter Milan in the summer of 1995 and despite a slow start, aided the club in winning the double in 1998.

His strike on March 2, 2002. against Newcastle would go on to win the BBC’s Goal of the Season award and it was a thing of beauty.

Receiving a pass on the edge of the area from Robert Pires, Bergkamp made light of the uneven surface to nip the ball around Nikos Dabizas’ right shoulder before collecting and coolly slotting past Shay Given.

Writers fumbled in the dark for the words to suitably sum up the incident, but the adjective most apt was “balletic”.

Did Dennis Bergkamp score the best goal in #PL history #OnThisDay in 2002? pic.twitter.com/W6ghqpQVAV

The now-50-year-old’s strike opened the scoring on Tyneside before a Sol Campbell header doubled the advantage before the break.

Arsene Wenger’s men then produced a brilliant second-half display, repelling the rampant Magpies and sealing a victory to dent Newcastle’s title hopes and boost their own.

It was also crucial for their confidence, winning without Thierry Henry who was out due to an abdominal issue, while simultaneously landing a blow on their hosts who lacked their usual spark due to the absence of Craig Bellamy.

The Welshman’s knee troubles would be reflected in his team’s results, losing to Liverpool and Southampton but it was the draws against Ipswich, Aston Villa, Newcastle and Blackburn that cost Bobby Robson’s men.

In contrast, this result was the 11th match in a 21-game unbeaten run for Arsenal. They were slammed 3-1 by the Magpies at Highbury in December 2001 but bounced back and won their last 13 matches of the season to finish top, beating Liverpool by seven points.

To add further credence to their quality, Ray Parlour and Freddie Ljungberg were the heroes as they defeated Chelsea 2-0 at Cardiff’s Millenium Stadium to lift the FA Cup on May 4, before winning at Old Trafford three days later to seal the double.

The 2001-02 season was a magical one for the Gunners, with Bergkamp’s magnificence against the Magpies arguably the standout moment.